EDMOND, Okla., May 15, 2020 (SEND2PRESS NEWSWIRE) — NEXT Mortgage Events LLC (NEXT™), creator of NEXT women’s executive mortgage summit and NEXTMortgageNews.com, has announced that it has added two key positions to support the expansion of its digital footprint. Reneé Stanzione, NEXT’s director of digital communications, is responsible for developing the infrastructure to grow NEXT’s virtual community and expand its reach among mortgage industry executives. Amilda Dymi, NEXT’s news director, is responsible for creating and overseeing the majority of content for Up NEXT daily intel feed. 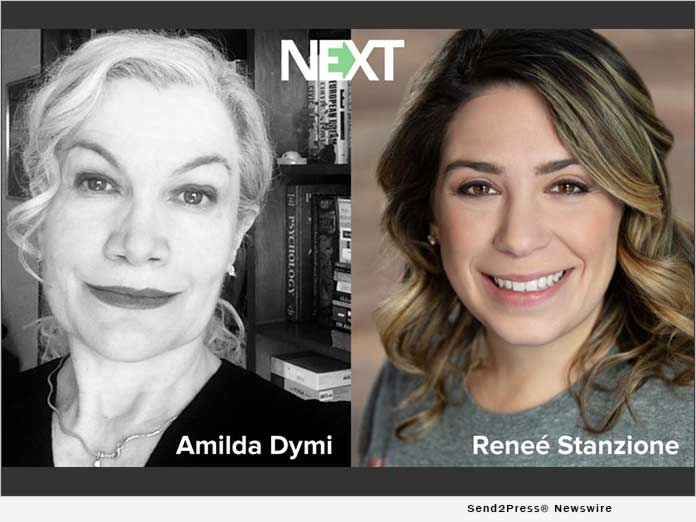 NEXT has been expanding into digital content since 2019, when it began publishing profiles on top women executives on its website, NEXTMortgageNews.com. In January 2020, NEXT launched Up NEXT, its daily intel feed delivered via email to thousands of top mortgage industry executives.

Ms. Stanzione brings nearly a decade of communications experience to her post. Prior to joining NEXT, she was public relations manager at AIME, the Association of Independent Mortgage Experts, where she increased brand awareness for the nonprofit by 192% from the previous year via organic media placements. Her career also includes work with companies that include Brownstein Group, Slice Communications and Freeman Public Relations where she secured media coverage in local and national outlets that include CNN Business, Yahoo! Finance, The Washington Post, Apartment Therapy, FOX29, CBS Philly, NBC10 and PHL17.

Ms. Dymi is a veteran journalist with decades of experience covering the mortgage and financial markets and is also a marketing consultant specializing in startup enterprises. Throughout her career, Dymi has held a wide range of editorial roles at outlets that include Debtwire, American Banker, Mortgage Servicing News and National Mortgage News. She was formerly a radio correspondent for the British Broadcasting Corporation, also known as the BBC.

About NEXT Mortgage Events LLC

In January 2018, NEXT Mortgage Events broke the mortgage industry’s unspoken barriers that limit women’s access to competitive intel and networking-based information exchange, when it introduced NEXT, the mortgage technology summit for women. NEXT is a two-day, tech-focused symposium based on lenders sharing competitive intel with other lending executives. A boutique gathering, each NEXT event is limited to 200 attendees, and targets a select group of decision making executives. Roughly 85-90% of lender attendees hold a title of VP or higher and approximately 85% of attendees are women. NEXT is held twice a year, in winter and summer. For more information visit https://nextmortgagenews.com/, follow @NEXTmtgEvents or email info@NEXTmortgageEvents.com.

More from NEXT Mortgage Events LLC

ABOUT THE NEWS SOURCE:
NEXT Mortgage Events LLC

NEXT Mortgage Events LLC is the creator of NEXT, the first bi-annual women's mortgage technology conference and expo. NEXT features informational tech-focused talks, a fast-paced tech demonstration showcase, a product-focused exposition hall and well-organized networking events - all in a comfortable environment catering to the accomplished woman executive.

LEGAL NOTICE AND TERMS OF USE: The content of the above press release was provided by the “news source” NEXT Mortgage Events LLC or authorized agency, who is solely responsible for its accuracy. Send2Press® is the originating wire service for this story and content is Copr. © NEXT Mortgage Events LLC with newswire version Copr. © 2020 Send2Press (a service of Neotrope). All trademarks acknowledged. Information is believed accurate, as provided by news source or authorized agency, however is not guaranteed, and you assume all risk for use of any information found herein/hereupon.