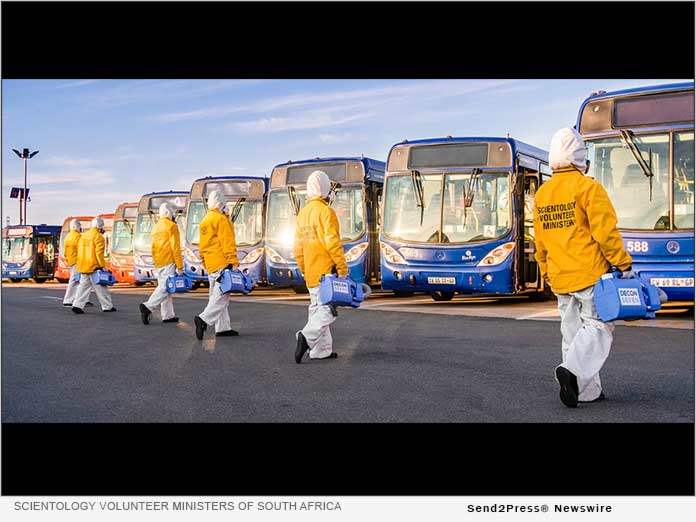 PHOTO CAPTION: Since the pandemic began, Scientology Volunteer Ministers of South Africa have provided more than 1.1 million hours of service to their communities.

Mandela Day commemorates the birthday of Nelson Mandela “in recognition of the former South African President’s contribution to the culture of peace and freedom.” Its message: “Everyone has the ability and the responsibility to change the world for the better.” It is this very purpose that has inspired South African Scientology Volunteer Ministers every day since the pandemic began. The Church of Scientology International features their work in a series of videos on an interactive timeline on the Scientology website.

With a Level 4 lockdown in place in the country to counter the third wave of COVID-19, Scientology Volunteer Ministers of South Africa marked Mandela Day 2021 by suiting up and heading out for yet another day of service.

In response to the pandemic, since March 2020, these volunteers have:

The volunteers also provide educational booklets to help people understand how to keep themselves and their families safe by applying effective protocols. These booklets, available to read or download from the How to Stay Well Prevention Resource Center on the Scientology website, are published in 21 languages including Zulu, Sotha and Xhosa—the native languages of nearly half the nation. South African Volunteer Ministers have handed out more than a million copies of Stay Well booklets.

One of the stories featured on the interactive timeline on the Scientology website quotes an executive in the railroad sector.

“In my entire career life, I have not actually been contacted by someone who wants to assist government,” she said. Some 300,000 people travel through the Johannesburg station daily and although their crews disinfect and clean, they have not been able to decontaminate them. When this executive heard that the Scientology volunteers offered to do this, she thought “Is this for real?” And she rushed to the station to see for herself and was amazed to see them performing this service free of charge.

“You do things with discipline, with commitment and with precision,” said another transportation executive. “That’s what I’ve learned from each one of you. The passion—it will remain with me.”

“You guys came in here to help us,” said the SAPS (South African Police Service) colonel in charge of a Johannesburg precinct in one of the videos. “You guys take care of our foot soldiers by sterilizing our vehicles. This is what we call police-community partnership. It sends a message to everyone.”

The volunteers also clean and sanitize orphanages and homes for the elderly and train caregivers on how to protect themselves and those under their charge. One caregiver described his dilemma: although it puts him at risk to come to work, he sets his concerns aside because those in his facility need his help. He is grateful that the Volunteer Ministers disinfected the home and made sure the staff and their beneficiaries learned how to care for themselves.

When she started learning the 19 Tools for Life Courses, a school principal didn’t want to stop until she finished them all. “They are related to my everyday life and living,” she said.

A bishop from Pretoria said this knowledge is the key to eradicating poverty and hunger.

A pastor from Mmametlhake said the Scientology courses completely changed how she counsels her congregation because now she can listen and once she understands what is bothering them, she has a spiritual toolkit she can empower them with.

A pastor from Pretoria admitted that he thought he “knew it all,” but he now sees he didn’t. “These courses helped me be a better person,” he said.

The Church of Scientology response to the pandemic has been global and is illustrated by more than 1,200 images and 14 videos at 20/21: A Look Behind & A Look Ahead on the Scientology website. The interactive timeline including all videos may be viewed in 17 languages.

The Church of Scientology Volunteer Ministers program is a religious social service created by Scientology Founder L. Ron Hubbard in the mid-1970s. It constitutes one of the world’s largest independent relief forces.

*Caption: Since the pandemic began, Scientology Volunteer Ministers of South Africa have provided more than 1.1 million hours of service to their communities.