GREEN BAY, Wis., June 7, 2013 (SEND2PRESS NEWSWIRE) — “The Ultimate Packer Fan Connection” began as just a thought three years ago by Super Fan Wayne “The Ultimate Fan” Sargent and Steve “The Owner” Tate. Fans from all over the world brought them to realize there was a need to host an event reuniting unity amongst Packer Fans. With the cooperation of The Stadium View Bar and Grill “The Ultimate Packer Fan Connection” was founded. This annual Event will feature a Packer Player as host to raise money for his cause or charity.

On Saturday, June 15, 2013, Packer Fans from all over the country will be heading to “The Stadium View Bar and Grill” in Green Bay to participate in the 2nd annual “Ultimate Packer Fan Connection.” This year’s event is hosted by Pro Bowler and Packer Hall of Famer William Henderson on behalf of the Kiwanis Organization and Children’s Autism. Together they have set a goal to raise $1.5 Million to purchase and donate iPads with special apps that assist and enable autistic children to learn and communicate with these newly found tools. 100 percent of the proceeds will go to Children’s Autism.

This is a FREE EVENT and the public is invited.

For future Green Bay Packer player appearances or booking the Ultimate Packer Fan and Steve the Owner inquires, please contact Mayfield Sports Marketing. Mayfield Sports Marketing is dynamic and energetic. Mayfield Sports Marketing is a marketing firm and booking agency that assists corporations, non profit organizations and third parties in finding a player agent, business manager or contacting the player directly. We can assist you in hiring the player/celebrity for an autograph session, golf outing, football camp, paid appearance or endorsement deal. We can find fees associated with an appearance and hire a football celebrity such as for a keynote speaking engagement, trade expo, corporate event, store grand opening or TV/radio commercials. Contact us today at http://mayfieldsportsmarketing.com or call 262-366-8188. 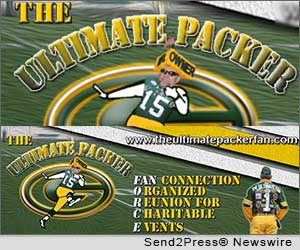 Alternate Headline: The Ultimate Packer Fan Connection to converge on The Stadium View Bar and Grill in Green Bay

NEWS ARCHIVE NOTE: this archival news content, issued by the news source via Send2Press Newswire, was originally located in the Send2Press® 2004-2015 2.0 news platform and has been permanently converted/moved (and redirected) into our 3.0 platform. Also note the story “reads” counter (bottom of page) does not include any data prior to Oct. 30, 2016. This press release was originally published/issued: Fri, 07 Jun 2013 17:33:12 +0000

More from The Ultimate Packer Fan

ABOUT THE NEWS SOURCE:
The Ultimate Packer Fan

LEGAL NOTICE AND TERMS OF USE: The content of the above press release was provided by the “news source” The Ultimate Packer Fan or authorized agency, who is solely responsible for its accuracy. Send2Press® is the originating wire service for this story and content is Copr. © The Ultimate Packer Fan with newswire version Copr. © 2013 Send2Press (a service of Neotrope). All trademarks acknowledged. Information is believed accurate, as provided by news source or authorized agency, however is not guaranteed, and you assume all risk for use of any information found herein/hereupon.