NEW YORK CITY, N.Y., Sept. 21, 2021 (SEND2PRESS NEWSWIRE) — With the worldwide release of Apple’s long-awaited iOS 15, PassFab has proudly announced the launch of its all-new PassFab iPhone Unlocker and PassFab Activation Unlocker. Both unlocking apps support iOS 15 and are a perfect and handy tool for removing Apple ID or FMI. Moreover, they can be used to unlock iPhone screen passcode, Apple ID, screen time passcode, and MDM lock in minutes, and they can also unlock a locked, disabled, or broken screen iPhone instantly. 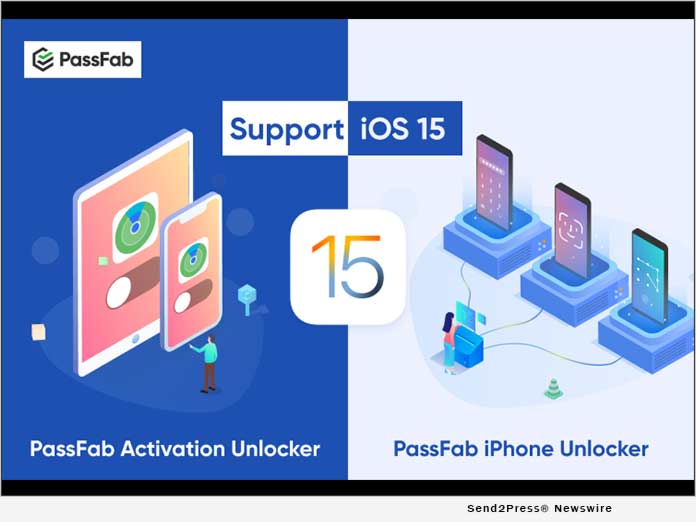 “Since our foundation in 2010, we have proudly developed a series of excellent password recovery software to help police agencies, state, local government agencies, IT, and forensic professionals and tens of thousands of business and private users solve their password problems,” said the spokesperson of PassFab, while introducing PassFab. “We are extremely grateful to our valued customers for having faith in us and helping us establish our company as a leading password recovery tool developer at a global level,” he added. Undoubtedly, PassFab is the ultimate digital locksmith of the twenty first century.

In addition, the all-new PassFab iPhone Unlocker and PassFab Activation Unlocker are packed with a wide range of great features and benefits. PassFab iPhone Unlocker supports iOS 15, and it can also help factory reset iDevices without password or Apple ID. Furthermore, the iPhone unlocking solution by PassFab also removes Apple ID from a device without any password or verification. The purpose of both these new unlocking software is to make the lives of iPhone users worldwide easier because there are millions of Apple device users, who often forget the password of their Apple ID.

Just like the PassFab iPhone Unlocker, PassFab Activation Unlocker also supports iOS 15, and it has many amazing benefits for the users. The greatest benefit is that it can bypass iCloud activation lock without Apple ID, and it can also remove activation lock on iPhone, iPad or iPod touch. Moreover, PassFab Activation Unlocker can also turn off Find My iPhone/iPad without Apple ID password. Removing Apple ID or FMI is now available on iOS 15. Furthermore, it is also compatible with Windows 10/8.1/8/7, MacOS 10.11-11.1.

For more information regarding these two amazing new solutions by PassFab, please click the links below:

LEGAL NOTICE AND TERMS OF USE: The content of the above press release was provided by the “news source” PassFab or authorized agency, who is solely responsible for its accuracy. Send2Press® is the originating wire service for this story and content is Copr. © PassFab with newswire version Copr. © 2021 Send2Press (a service of Neotrope). All trademarks acknowledged. Information is believed accurate, as provided by news source or authorized agency, however is not guaranteed, and you assume all risk for use of any information found herein/hereupon.