"Probably the most interesting thing we've seen this past year, is the further explosion in self-published titles. From convicted felons, to first-time mystery ghost story authors, to children's picture books, the fountain of creativity is really amazing," said PNW editor Christopher Simmons.

LOS ANGELES, Calif., March 15, 2013 (SEND2PRESS NEWSWIRE) — Publishers Newswire (PNW), an online resource established in 2004 for small publishers, as well as lesser known and first-time book authors, has today announced its latest semi-annual “Books to Bookmark” list. This is a round-up of 10 new and recent books from Q4/2012 and Q1/2013 which may have been missed due to not originating from major New York book publishing houses, or “big name” authors.

“Probably the most interesting thing we’ve seen this past year, is the further explosion in self-published titles. From convicted felons, to first-time mystery ghost story authors, to children’s picture books, the fountain of creativity is really amazing,” said PNW editor Christopher Simmons. PNW’s Simmons has been a working journalist for over 30 years, and has written widely on the topic of publishing, marketing, and e-books. He is also the author of a self-published book on digital artwork.

The following list of 10 books (in alphabetical order) are provided as “worth a look” for media and booksellers, as well as avid readers of new and unique literary content. To learn more about these and other books (and e-books) in detail, visit: http://www.publishersnewswire.com/ .

Author Mustafaa As-Salafi’s “Family Tiez” (ISBN: 978-0976224310; paperback; Level V Publishing) is the fictional story of a Muslim family’s struggle to stay together through the trials of the urban drug culture: addiction, drug dealing, dirty cops, prison, and murder; as told by someone who has walked several miles in each character’s shoes. “Family Tiez” has been an underground, nationwide, best selling novel that chronicles the story of a large-scale, illegal drug distribution enterprise in the Tri-State area. Now, re-released in eBook formats, including Kindle and iBooks. “Family Tiez” is close to, but way more than what the media and law enforcement have characterized it as: it is life imitating art. The author invites readers to witness “Family Tiez” for themselves.

On December 16, 2008, The News Journal, Wilmington, Delaware’s largest local newspaper, ran a cover story with headline: Urban fiction author pleads guilty to drug trafficking: 10 counts could get the Wilmington man life in prison. This story was about Mustafaa. The July 2008 arrest of Mustafaa was carried by various media outlets across the country, including USA Today. Mustafaa did not receive a life sentence; he is expected to be home soon.

* HAVING A WHALEY OF A TIME.

In the new book, “Having a Whaley of a Time” (ISBN: 978-0578104836; paperback; 94pp; DKeeley Press), author and publisher Donna Keeley uses the history and “documented ghosts” from the Whaley House in San Diego, Calif. to weave an enjoyable, fictional mystery with real facts. “I wanted to do something different with the mystery genre,” says Keeley. “By pairing a fictional story with a real, haunted location I can fulfill my love of research with the fun of writing.”

Each book in the new Paranormal Mystery series features a real haunted location as the backdrop for each mystery. The ghosts documented at these locations become characters in the book and help the fictional main character Shannon MacIntyre solve her mystery. Kindle edition also available.

* HEALTHY HANNAH’S FITNESS FABLES: A PROMISE TO YOURSELF.

A new book, “Healthy Hannah’s Fitness Fables: A Promise to Yourself” (ISBN: 978-0-9852773-0-7; KidsProsper Publishing) pairs father-daughter authors in the fight against childhood obesity. The characters in “Healthy Hannah’s Fitness Fables” guide children on a healthy rhyming adventure about exercise and nutrition. Through playful and entertaining illustrations, one by one, Healthy Hannah, Maxwell Muscle, Low-Fat Larry, and Aerobic Annie delight in a healthy and fun journey from birth through adulthood. It is illustrated by a former personal trainer, Joe Romano II.

“Childhood obesity is a problem that requires multi-pronged efforts,” says Jay England, co-author. “We have to stay on top of the issue and the earlier you introduce healthy habits to children, the more likely they will practice healthy habits and engage in fitness as they grow older.”

In the new children’s book “Little Green” (ISBN: 9780981587974; Paraphrase, LLC) by author Arnold Rudnick, readers discover an important message and question to consider: Isn’t it possible? Released in “Fraugust 2012” by independent publisher Paraphrase, LLC, “Little Green” is a picture-book for 2-7 year olds written by Rudnick, with illustrations by Marcelo Gorenman, featuring a little green frog on a quest to be special.

“It’s about time we admit that not everything is possible,” said Rudnick. “For too long, movies and books have pretended anything is possible, but kids are smart and know that’s not true. Messages that are meant to motivate quickly become empty platitudes. However, ALMOST anything IS possible! This simple, honest qualification offers a more powerful message and an inspirational lesson for everyone.”

The magisterial “collaboration” over half a lifetime between historian Dumas Malone and his subject, Thomas Jefferson, is the basis for William G. Hyland Jr.’s compelling “Long Journey with Mr. Jefferson” (ISBN: 978-1612341972; clothbound; 328pp; Potomac Books). Malone, the courtly and genteel historian from Mississippi, spent 38 years researching and writing the definitive biography of the man who “invented the United States of America.” Offering much more than most biographies, this book imparts extensive insights into Malone’s earlier years in Mississippi and Georgia, and how they shaped his character. Through interviews with his intimates, family members, rivals, and subordinates, Hyland generates a true portrait of the man behind the intellect and the myth.

* MURDER AND MISUNDERSTANDING; ONE MAN’S ESCAPE FROM INSANITY.

The new autobiography by author Shuvender Sem, “Murder and Misunderstanding; One Man’s Escape from Insanity” (ISBN-13: 978-1479256969; paperback; 200pp; CreateSpace) is the story of Sem, who on March 1, 2004 became known as “The Maharishi Murderer.” In one moment Sem was a college student. In the next he was “The Maharishi Murderer.” Shuvender killed freshman Levi Butler without provocation on the campus by stabbing him four times in the chest with a paring knife. Deemed competent to stand trial, the judge ruled he was “not guilty by reason of insanity” at the request of both the defense and the prosecution.

Against popular belief, NGRI is an extremely rare plea, used in less than one percent of criminal cases. A not guilty result is even more uncommon, occurring just one-quarter of one percent of the time. Now, after years of psychotropic medications and intense therapy, Shuvender is telling his story of schizophrenia in his autobiography. The book is available in paperback; as well as Kindle, iPad and Nook digital editions.

* ON MY FEET AGAIN: MY JOURNEY OUT OF THE WHEELCHAIR USING NEUROTECHNOLOGY.

In her new book, “On My Feet Again: My Journey Out of the Wheelchair Using Neurotechnology” (ISBN: 978-0988234208; paperback; 176pp; Neurotech Press), author Jennifer French, a quadriplegic and competitive sailing athlete who recently medalled at the 2012 Paralympics Games in London, tells her inspiring and intellectually stimulating story of how a determined and resourceful young woman overcame many of the obstacles that came her way after being paralyzed in a snowboarding accident. Although told she would never get out of her wheelchair, Jennifer refused to accept that fate and sought out experimental new technologies for people with spinal cord injuries.

French became a participant in a clinical trial of a neuroprosthetic system that enables her to stand up out of her wheelchair and move around on her own two feet using her own muscles, which are stimulated by 24 surgically implanted electrodes. Along the way, she helped advance the technology by working with the research team to test new features, push the limits of her strength and endurance, and prove the viability of this new therapy for thousands of other potential recipients-including injured soldiers returning from war. The book is also available in e-book format.

* SO YOU WANT TO BE A LANDLORD: TALES FROM THE CRYPT.

DJV Murphy considered the current market conditions as the backdrop to his latest book “So You Want To Be A Landlord: Tales From The Crypt” (ISBN-13: 978-1461087014; paperback). He ventures there is no bad time to invest in property. He calls it a humorous “how to” book about getting in the game of investment real estate but also offers a serious slant of avoiding the pitfalls of being a landlord. “This is not for the big hitters in the real estate investment field,” Murphy said, “but it is written with small town ‘Donald Trumps’ in mind.”

The 100 plus page book combines humor with technical information about how to succeed being a landlord and is illustrated with cartoons depicting the pitfalls and successes of owning investment real estate. The illustrator is B.J. Nartker a leading artist from California, who provided the visuals to the book. Murphy chose the illustration themes and cut lines with Nartker interpreting them as cartoons. The book is also available as a Kindle edition.

* THE CHINESE ORIGIN OF THE AGE OF DISCOVERY.

In the new book “The Chinese Origin of the Age of Discovery” (ISBN: 978-1-62141-693-7; 300pp; Diogenes Research; Booklocker.com), veteran Researcher Chao C. Chien has meticulously collected and analyzed the records preserved from the previously rarely examined history of the Age of Discovery and the results are conclusive. Did the Chinese precede Christopher Columbus in discovering America? The question now has been settled once and for all.

* THE INDIE AUTHOR REVOLUTION: AN INSIDER’S GUIDE TO SELF-PUBLISHING.

They’re also attracting new readers through the sales of e-books.” A writer, editor, blogger, and speaker, Beevas is vice president of award-winning Beaver’s Pond Press, where she has led hundreds of indie authors through the publishing process. Her passion for the self-publishing movement also led her to launch Wise Ink, an online support community for authors. Also available in e-book formats.

For more information on these and other books and entertainment publishing you likely have never heard of, visit: http://publishersnewswire.com/news/publishing-news/book-news .

Publishers Newswire is an online publication, part of the Neotrope News Network. Books to Bookmark(TM), Books2Bookmark(TM), Publishers Newswire(TM), and Neotrope, are service marks and trademarks of Neotrope(R), Torrance, Calif., USA. Neotrope is a registered trademark in the U.S. and Europe. All rights reserved. All other trademarks acknowledged. Information is believed accurate but is not guaranteed. Publishers Newswire does not endorse, “recommend,” or review any of the book titles mentioned, and the specific books mentioned are for informational purpose only. 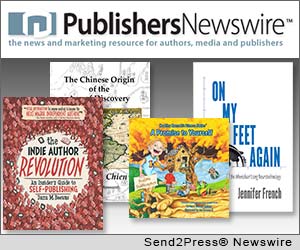 Alternate Headline: 10 Interesting New Book Titles from 2013 selected as ‘worth a look’ by Publishers Newswire

NEWS ARCHIVE NOTE: this archival news content, issued by the news source via Send2Press Newswire, was originally located in the Send2Press® 2004-2015 2.0 news platform and has been permanently converted/moved (and redirected) into our 3.0 platform. Also note the story “reads” counter (bottom of page) does not include any data prior to Oct. 30, 2016. This press release was originally published/issued: Fri, 15 Mar 2013 17:54:17 +0000

LEGAL NOTICE AND TERMS OF USE: The content of the above press release was provided by the “news source” Publishers Newswire or authorized agency, who is solely responsible for its accuracy. Send2Press® is the originating wire service for this story and content is Copr. © Publishers Newswire with newswire version Copr. © 2013 Send2Press (a service of Neotrope). All trademarks acknowledged. Information is believed accurate, as provided by news source or authorized agency, however is not guaranteed, and you assume all risk for use of any information found herein/hereupon.