Fundraiser to be held at AleSmith Brewing Company will help charity organize food drives, and to coordinate food rescues

SAN DIEGO, Calif., Feb. 3, 2020 (SEND2PRESS NEWSWIRE) — Move For Hunger announced today that registration is open for its first-ever San Diego Truck Pull fundraiser. The event, in which teams of 5-10 will compete to see who can pull an eight ton truck 100 feet in the fastest time, will be held at AleSmith Brewing Company (9990 AleSmith Ct., San Diego, CA 92126) on Saturday, February 29 from Noon-3 p.m. 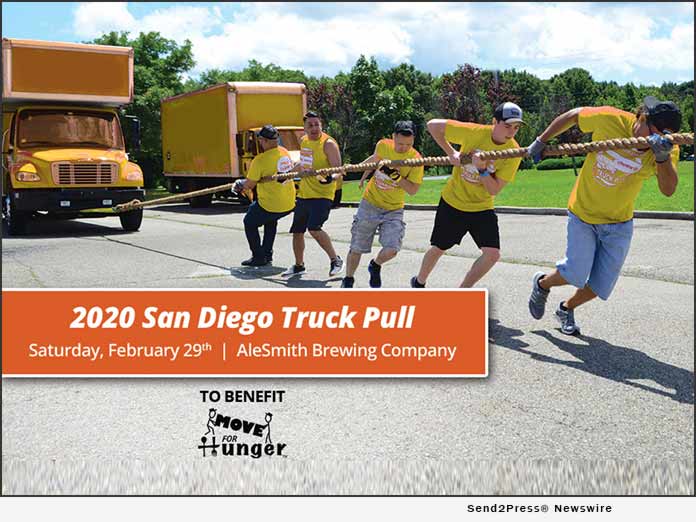 Registration is $200 per team and can be completed at http://SanDiegoTruckPull.com (note: link redirects to GoFundMe page).

Proceeds from the event will benefit Move For Hunger, a national non-profit organization that has created a sustainable way for the relocation industry to reduce food waste and fight hunger.

Ace Relocation Systems, a national moving company headquartered in San Diego, will provide one of their trucks for the event. Ace Relocation and Dewitt Move Worldwide are among the more than 1,000 moving companies that have joined Move For Hunger’s national network of relocation professionals. Ace Relocation Systems & Dewitt Move Worldwide encourage their customers to donate unopened, non-perishable food during the moving process and then volunteers to deliver the donations to the local food bank, free of charge.

This event will provide Move For Hunger with the resources it needs to continue to expand its network, organize food drives, and to coordinate food rescues.

“More than 4 million people in California are facing hunger every day, including 1 in 6 children,” said Adam Lowy, Executive Director/Founder of Move For Hunger. “Meanwhile, we are wasting 40% of the food in the United States each year. The San Diego Truck Pull is going to be a fun event that will raise awareness about these issues, while also providing Move For Hunger with the support we need to collect 4 million pounds of food this year.”

“We have a long-standing tradition of helping those in need in the San Diego community,” said Jeremy Day, General Manager, Ace Relocation Systems. “This event fits right in with that. We are thrilled to participate.”

Since 2009, Move For Hunger has delivered more than 16.3 million pounds of food – that’s the equivalent of 13.6 million meals – to food banks all across the United States and Canada. The funds raised at the San Diego Truck Pull will support Move For Hunger’s hunger relief and food rescue programs, both in California and nationwide.

Move For Hunger is a national 501(c)(3) non-profit organization that has created a sustainable way to reduce food waste and fight hunger. We have mobilized the leaders of moving, relocation, and multi-family industries to provide their customers, clients, and residents with the opportunity to donate their food when they move. Members of Move For Hunger also organize community food drives, participate in awareness campaigns, and create employee engagement programs. For more information, or to find out how you can host your own food drive, visit http://www.moveforhunger.org/.

Ace Relocation Systems is a privately held, family owned and operated corporation headquartered in San Diego, CA. In addition to office and warehouse there, they have the same in eight additional locations from coast to coast. The metro markets they cover locally are Los Angeles/Orange County, The San Francisco Bay Area, San Diego, Seattle/Tacoma, Phoenix, Austin, San Antonio, Chicago, Orlando, Tampa, Baltimore and Washington, DC. Through the Atlas Van Lines network, they can service any location in North America. Ace Relocation also executes, or arranges for, a substantial amount of international relocations, numbering in the thousands. Their sister companies within ARCA International, international forwarding companies, assists with the shipments being transported by air and sea. The majority of Ace Relocation’s revenue comes from servicing the moving needs of the US Government and Fortune 500 companies, including some of the most recognizable entities in the world. For more information, visit https://www.acerelocation.com/.

The DeWitt Companies began as a one-truck operation in 1927 and has transformed into an integrated network of five sister companies that provides relocation, logistics, warehousing and freight forwarding services to businesses, households and military clients all over the world. With wholly-owned assets in Hawaii, Alaska, Guam and the Mainland, our COD, DOD, GSA, and Corporate clients trust us for easy, affordable, and safe transportation of their goods. The DeWitt family of companies includes Royal Hawaiian Movers, DeWitt Guam, Royal Alaskan Movers, Approved Freight Forwarders, and DeWitt Move Worldwide (http://www.dewittmove.com), which operates in more than 100 countries.

Costs associated with dissemination of this news announcement were donated to Move For Hunger by Neotrope® and Send2Press®, a proud supporter of the charity.

View More NonProfit and Charities News
"We have a long-standing tradition of helping those in need in the San Diego community," said Jeremy Day, General Manager, Ace Relocation Systems. "This event fits right in with that. We are thrilled to participate."

LEGAL NOTICE AND TERMS OF USE: The content of the above press release was provided by the “news source” Move For Hunger or authorized agency, who is solely responsible for its accuracy. Send2Press® is the originating wire service for this story and content is Copr. © Move For Hunger with newswire version Copr. © 2020 Send2Press (a service of Neotrope). All trademarks acknowledged. Information is believed accurate, as provided by news source or authorized agency, however is not guaranteed, and you assume all risk for use of any information found herein/hereupon.