NORTH MIAMI BEACH, Fla., Feb. 28, 2017 (SEND2PRESS NEWSWIRE) — Redevelopment Management Associates (RMA – www.rma.us.com) announced that their award-winning redevelopment strategies for North Miami Beach have spurred land sales of over $200 million, with an estimated $500 million in new construction now underway or approved. The firm was hired to reinvent the city to compete with other thriving municipalities. Since implementing RMA’s form based zoning regulations and Mixed-Use Comprehensive Plan Initiative, which won the APA Florida Award of Merit, the city has become a coveted location for developers. 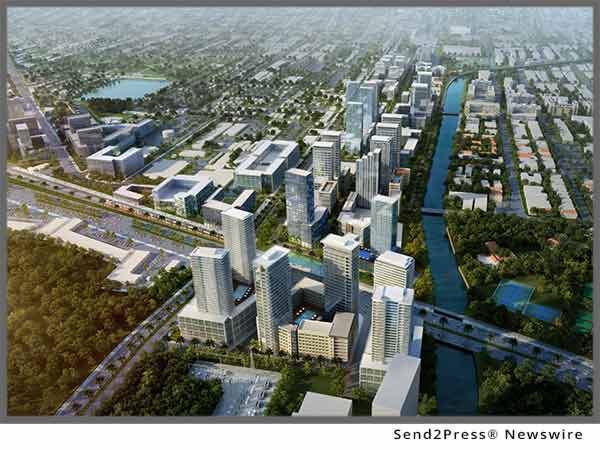 “The recent $21 million sale of a 17.8 acre site on West Dixie Highway moved us past the $200 million milestone number,” said Natasha Alfonso-Ahmed, RMA’s Director of Urban Design & Planning. “Prior to RMA’s involvement, investment in the city was hindered by restrictive codes and poorly planned incentive programs. But thanks to the new vision plan, there are now over 1,500 residential units, 270 hotel rooms, 215,000 sq. ft. retail and over 100,000 sq. ft. of office space approved or underway.”

“Implementation of the new vision plan would not have been possible without strong leadership from the Mayor and City Commission and the professionalism and focus of the city administration,” added Kevin Crowder, RMA’s Director of Economic Development. “They were focused on long-term, sustainable economic growth for the community rather than scoring short-term political points. The city was previously viewed as anti-business and anti-investment, and the city’s new leadership was able to change their identity and reputation at a speed I’ve never seen before.”

Crowder and his team conducted a thorough market and financial feasibility assessment of North Miami Beach which helped guide the vision plan. His assessment led to market based code revisions on height and density, attracting new developers. The Urban Design and Planning team crafted a vision plan and form based zoning regulations that centered upon the principles of good urban design and achieved a balance between the needs of the community and the market realities. The team suggested revisions to the CRA Tax Increment Recapture Incentive program to encourage economic development in the CRA and generate enhanced public benefits for the city.

“The CRA Tax Increment Recapture Incentive program was offering tremendous incentives,” explained Alfonso-Ahmed. “However, these tax incentives were still not attracting developers. We adjusted the code to spur interest in North Miami Beach, while also revamping the incentive program to provide greater benefits to the community.”

RMA’s plan restricted the benefits developers would receive by making some of the incentives contingent upon the developers adding public benefits to their projects, including enhancements to the public streetscapes and infrastructure, public open spaces, public parking, public art, Green buildings and paying into a public open space fund for the beautification of the Snake Creek Canal.

RMA’s involvement, however, went much deeper than implementing changes on paper, the team was hands-on in negotiating and mediating deals.

For example, the site of the adult entertainment center, Dean’s Gold, is now set to become an upscale waterfront residential development in the city. Thanks to RMA’s initiative, the owner of the gentlemen’s club declined a pharmacy chain offer, and instead sold for a much higher price to a developer, who was influenced by the city’s new vision. RMA was also instrumental in stipulating that the developer include public spaces in the design.

With the aforementioned West Dixie Highway project, RMA halted the initial development plans for the once contaminated former gas company parcel in order to mediate a better design. RMA listened to the residents’ concerns about the developer’s height plans, which would have encroached upon the neighboring single family homes, and mediated between the residents and developer to negotiate better design criteria, while also requiring an array of new public spaces.

About RMA:
Founded in 2009 by Kim Briesemeister and Chris Brown, Redevelopment Management Associates (RMA) is comprised of a phenomenal team of redevelopment experts passionate about building better communities. RMA is the most experienced full service consulting and management firm in the state of Florida specializing in revitalizing core areas and corridors for cities, counties and special districts nationwide.

LEGAL NOTICE AND TERMS OF USE: The content of the above press release was provided by the “news source” RMA or authorized agency, who is solely responsible for its accuracy. Send2Press® is the originating wire service for this story and content is Copr. © RMA with newswire version Copr. © 2017 Send2Press (a service of Neotrope). All trademarks acknowledged. Information is believed accurate, as provided by news source or authorized agency, however is not guaranteed, and you assume all risk for use of any information found herein/hereupon.