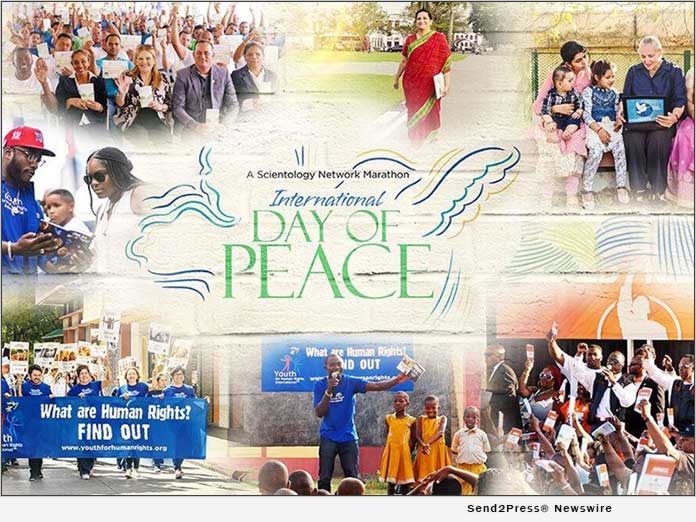 The Universal Declaration of Human Rights calls on those who cherish freedom to “strive by teaching and education to promote respect for these rights and freedoms.” These are ideals at the heart of the humanitarian campaigns supported by Scientologists, the Church of Scientology International, and Scientology Churches worldwide and showcased in the Scientology Network International Peace Day Marathon.

* “Voices for Humanity,” a television series spotlighting the work of humanitarians at the grassroots level to foster human rights and reverse pressing social ills in their cities and nations

* “The Way to Happiness” book-on-film, written by author, humanitarian and Scientology Founder L. Ron Hubbard. Learn how this internationally acclaimed common-sense guide to better living brokered peace among warring gangs in South Central L.A. and was a major force in fostering peace and reconciliation in Colombia.

The full schedule is available at http://scientology.tv/schedule.

Scientology Network debuted March 12, 2018. Since launching with a welcome by Scientology ecclesiastical leader Mr. David Miscavige, the Scientology Network has been viewed in 240 countries and territories worldwide in 17 languages. Satisfying the curiosity of people about Scientology, the network takes viewers across six continents, spotlighting the everyday lives of Scientologists, showing the Church as a global organization, and presenting its social betterment programs that have touched the lives of millions. The network also showcases documentaries by independent filmmakers who represent a cross-section of cultures and faiths, but share a common purpose of uplifting communities.

*Caption: On International Day of Peace, September 21, a full day of programming on the Scientology Network promotes the peacebuilding work of humanitarians.