SecuGen to Demonstrate Fingerprint Technology for Android at CES

SANTA CLARA, Calif., Jan. 2, 2013 (SEND2PRESS NEWSWIRE) — SecuGen Corporation is pleased to announce a demonstration of Android™ compatibility with SecuGen Hamster IV™ and Hamster Plus™ fingerprint readers. This demonstration will be shown in SecuGen’s booth (#36175) at the 2013 International Consumer Electronics Show (CES) in Las Vegas from January 8th through the 11th.

SecuGen’s soon-to-be released SDK for Android will allow developers to create mobile applications secured by a user’s fingerprint. This SDK for Android will incorporate SecuGen’s MINEX certified, FIPS 201/PIV-compliant fingerprint template extraction and matching algorithms. The SDK will also include drivers and APIs for image capture and processing of fingerprints scanned by the Hamster Plus and Hamster IV readers as well as the iD-USB SC and the iD-USB SC/PIV fingerprint and smartcard combination devices. SecuGen’s biometric products are widely recognized for being rugged, accurate, and affordable and are sold through reseller partners worldwide.

“We are excited to be able to offer Android compatibility,” stated Dan Riley, Vice President of Engineering for SecuGen. “Our partners have asked us for this, and of course we are going to provide the tools that they need to succeed. This SDK for Android is one of several exciting new products that we will be bringing to market in 2013.”

Won Lee, CEO of SecuGen added, “We are very pleased to be able to demonstrate Android compatibility at CES. Today mobile computing has become a ubiquitous platform for a broad range of applications including applications that demand high levels of security such as finance, health care and medical records, as well as the provision of government services. We are proud to be able to deliver to our partners the ability to leverage that platform.”

SecuGen is a registered trademark of SecuGen Corp. in the United States and other countries. Android is a trademark of Google Inc. 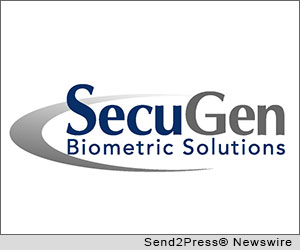 NEWS ARCHIVE NOTE: this archival news content, issued by the news source via Send2Press Newswire, was originally located in the Send2Press® 2004-2015 2.0 news platform and has been permanently converted/moved (and redirected) into our 3.0 platform. Also note the story “reads” counter (bottom of page) does not include any data prior to Oct. 30, 2016. This press release was originally published/issued: Wed, 02 Jan 2013 14:05:52 +0000