Won Lee, CEO of SecuGen added, "We are very pleased about the development of our new sensor technologies. We are always looking for ways to provide our partners with state of the art products and tools. We are very pleased to be able to make this new smaller yet very high quality fingerprint

SANTA CLARA, Calif., Dec. 16, 2013 (SEND2PRESS NEWSWIRE) — SecuGen Corporation is pleased to announce that it will be showcasing its new, ultra-compact fingerprint reader at the 2014 Consumer Electronics Show from January 7 through the 10th. The new Hamster Pro 20 and its OEM sensor version are both FAP 20 Mobile ID and PIV certified by the FBI and have been added to the FIPS 201/PIV Approved Products List (APL) by the General Services Administration (GSA).

SecuGen products have long been known for capturing high quality images, being very rugged, as well as being affordable for use in large deployments. The newly released fingerprint reader, the Hamster™ Pro 20 and its OEM sensor counterpart, the U20™, are very small and compact while retaining the ability to capture very high quality images. The small size will allow the U20 to be integrated into hardware products where space is limited. The U20 is rugged, affordable and small enough to be embedded in a very wide range of equipment, from ATMs to safes and from handheld devices to kiosks.

The Hamster Pro 20, a finished fingerprint reader that incorporates the U20, is a small, unobtrusive USB device that fits comfortably on any desktop or can be used as a portable fingerprint reader for mobile devices. SecuGen will offer free Software Developer Kits (SDKs) to software developers to create apps and applications that work with the new Hamster Pro 20 and U20 on Windows, Linux, and Android operating systems.

Dan Riley, Vice President of Engineering for SecuGen said, “Fingerprint readers are being deployed in increasingly diverse environments and must be able to capture great images time after time without any degradation. We are very excited to be offering such a very high quality device in an ultra-compact fingerprint reader.”

Won Lee, CEO of SecuGen added, “We are very pleased about the development of our new sensor technologies. We are always looking for ways to provide our partners with state of the art products and tools. We are very pleased to be able to make this new smaller yet very high quality fingerprint reader and sensor available to our partners around the world.”

The Hamster Pro 20 and the U20 will both be available for purchase starting in January. Visit SecuGen at the Las Vegas Convention Center in South Hall 4 – booth 36073 at the CES Show from January 7 – 10, 2014.

About SecuGen:
SecuGen Corporation (www.secugen.com) is the world’s leading provider of advanced, optical fingerprint recognition technology, products, tools and platforms for physical and information security. SecuGen designs and develops FBI-certified fingerprint readers and OEM components, developer kits and software, including NIST/MINEX-compliant algorithms. Known for high quality, ruggedness, and performance in a wide variety of applications and environmental conditions, SecuGen products are used by world-leading financial, medical, government, educational and corporate institutions and are sold through an extensive network of reseller partners including original equipment manufacturers, independent software vendors and system integrators around the world. 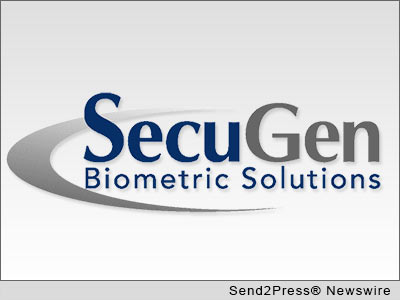 NEWS ARCHIVE NOTE: this archival news content, issued by the news source via Send2Press Newswire, was originally located in the Send2Press® 2004-2015 2.0 news platform and has been permanently converted/moved (and redirected) into our 3.0 platform. Also note the story “reads” counter (bottom of page) does not include any data prior to Oct. 30, 2016. This press release was originally published/issued: Mon, 16 Dec 2013 06:59:39 +0000

View More Biometrics and Bioware News
Won Lee, CEO of SecuGen added, "We are very pleased about the development of our new sensor technologies. We are always looking for ways to provide our partners with state of the art products and tools. We are very pleased to be able to make this new smaller yet very high quality fingerprint