Jeff Brown, of SecuGen stated, "We looked at the old model of a sensor and a separate board running the extraction and matching algorithms, and we have been able to unite all the parts and package them in one small sensor."

SecuGen will be showcasing the UN20 Serial at ISC West 2016 from April 6 – 8, 2016. Developers are invited to come by SecuGen’s booth, number 12133 in the Sands Expo and Convention Center in Las Vegas to see a demonstration of this revolutionary new OEM fingerprint sensor. The UN20 Serial is soon to be released.

Other products in the Unity BDP family will be announced over the next few months. These other products will include additional interfaces, such as Wi-Fi, Bluetooth and Ethernet, as well as hardware expansion boards that allow virtually limitless expandability.

Jeff Brown, VP of Sales and Marketing for SecuGen stated, “We looked at the old model of a sensor and a separate board running the extraction and matching algorithms, and we have been able to unite all the parts and package them in one small sensor. Embedding an open Linux development environment in the UN20 Serial makes this product unique in the industry. Pairing this with an astonishingly low price is a major breakthrough.”

“The SecuGen engineering team has come up with a new approach to delivering world class OEM sensors,” commented VP of Engineering Dan Riley. “The UN20 Serial is not just a sensor, it is an entire development platform. The uses for this product are nearly limitless. It represents a giant leap forward in OEM fingerprint technology.”

Won Lee, CEO of SecuGen, added, “For many years we have focused exclusively on delivering to our OEM partners the tools they need to compete successfully in this highly competitive industry. The UN20 Serial is the first of an amazing new product line, the Unity Biometric Development Platform (BDP). Unity BDP is the culmination of a decade of effort. We are very proud to be able to deliver the first product of its kind, a complete biometric development platform that is compact and affordable.”

About SecuGen:
SecuGen Corporation ( http://www.secugen.com/ ) is the world’s leading provider of advanced, optical fingerprint recognition technology, products, tools and platforms for physical and information security. SecuGen designs and develops FBI-certified fingerprint readers and OEM components, developer kits and software, including NIST/MINEX-compliant algorithms. Known for high quality, ruggedness, and performance in a wide variety of applications and environmental conditions, SecuGen products are used by world-leading financial, medical, government, educational and corporate institutions and are sold through an extensive partner network of reseller partners including original equipment manufacturers, independent software vendors and system integrators around the world.

SecuGen is a registered trademark of SecuGen Corp. in the United States and other countries. 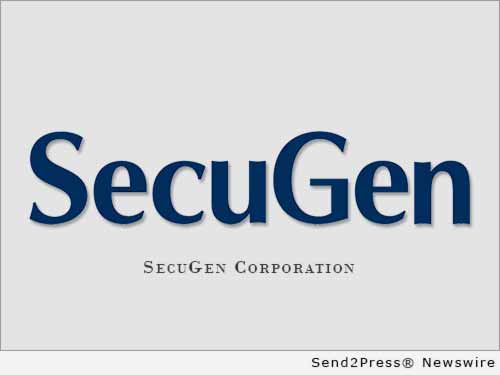 NEWS ARCHIVE NOTE: this archival news content, issued by the news source via Send2Press Newswire, was originally located in the Send2Press® 2004-2015 2.0 news platform and has been permanently converted/moved (and redirected) into our 3.0 platform. Also note the story “reads” counter (bottom of page) does not include any data prior to Oct. 30, 2016. This press release was originally published/issued: Mon, 28 Mar 2016 07:00:51 +0000

View More California Business News
Jeff Brown, of SecuGen stated, "We looked at the old model of a sensor and a separate board running the extraction and matching algorithms, and we have been able to unite all the parts and package them in one small sensor."

LEGAL NOTICE AND TERMS OF USE: The content of the above press release was provided by the “news source” SecuGen Corporation or authorized agency, who is solely responsible for its accuracy. Send2Press® is the originating wire service for this story and content is Copr. © SecuGen Corporation with newswire version Copr. © 2016 Send2Press (a service of Neotrope). All trademarks acknowledged. Information is believed accurate, as provided by news source or authorized agency, however is not guaranteed, and you assume all risk for use of any information found herein/hereupon.