"We are honored to be selected by CNN as one of the companies to make the CNN short list for buying American," said Ken Rakusin, president and CEO of Gordon Brush. "We are in esteemed company with both the established brands and start-ups."

COMMERCE, Calif., Dec. 17, 2015 (SEND2PRESS NEWSWIRE) — The FootMate® System by Gordon Brush was selected by CNN as one of the companies where one can buy American made products for the holidays.

In her article, “How to shop made in America for the holidays,” Emanuella Gringberg, CNN staff writer, says “…fewer consumer goods are made in the United States today … but that doesn’t mean American-made products no longer exist.”

“We are honored to be selected by CNN as one of the companies to make the CNN short list for buying American,” said Ken Rakusin, president and CEO of Gordon Brush. “We are in esteemed company with both the established brands and start-ups.”

Rakusin adds, “Promoting American made is vital to the strength, health, and viability of the United States. In an article we published, ‘Proud to be an American Manufacturer,’ Patriotism is paramount at Gordon Brush. Many end users are willing to sacrifice cost over quality, even though in the long run it ends up costing them more because they have to replace sub-standard product more frequently. Even under these competitive threats, Gordon Brush has been steadfast in its philosophy and commitment to manufacturing in the United States.”

The American-made FootMate® System helps make optimal foot health easy. It is a complete foot care system for cleaning, soothing, stimulating, and massaging feet in the shower. The FootMate® System is a brush and specially formulated gel that cleans and massages feet without having to bend over. An after shower cream was added to the line to keep feet soft and supple, day or night. The product is for anyone wanting a soothing, stimulating way to clean and massage their feet. The FootMate® System is the ultimate foot massage and the perfect way to pamper tired, aching feet.

For more information on the FootMate® System, contact Alan Schechter, vice president of sales and marketing, at alan@gordonbrush.com or (323) 450-2748, or http://www.footmate.com/.

About Gordon Brush:
Gordon Brush Mfg. Co., Inc. is an ISO 9001:2008 certified and leading manufacturer of specialty, custom and standard brushes for industrial and consumer purposes. The company makes over 15,000 medical, industrial, janitorial, and electronic brushes in Commerce, Calif. Over 2,000 different brushes are available for same day shipment. Gordon Brush has been featured on the ION Network, Discovery Channel, Bloomberg News, The Real Talk Show, and in the Los Angeles Times. 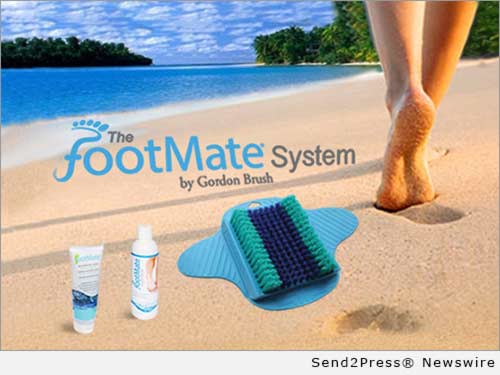 NEWS ARCHIVE NOTE: this archival news content, issued by the news source via Send2Press Newswire, was originally located in the Send2Press® 2004-2015 2.0 news platform and has been permanently converted/moved (and redirected) into our 3.0 platform. Also note the story “reads” counter (bottom of page) does not include any data prior to Oct. 30, 2016. This press release was originally published/issued: Thu, 17 Dec 2015 15:57:34 +0000

Made in the USA

View More Beauty Cosmetics and Spa News
"We are honored to be selected by CNN as one of the companies to make the CNN short list for buying American," said Ken Rakusin, president and CEO of Gordon Brush. "We are in esteemed company with both the established brands and start-ups."

LEGAL NOTICE AND TERMS OF USE: The content of the above press release was provided by the “news source” Gordon Brush Mfg. Co., Inc. or authorized agency, who is solely responsible for its accuracy. Send2Press® is the originating wire service for this story and content is Copr. © Gordon Brush Mfg. Co., Inc. with newswire version Copr. © 2015 Send2Press (a service of Neotrope). All trademarks acknowledged. Information is believed accurate, as provided by news source or authorized agency, however is not guaranteed, and you assume all risk for use of any information found herein/hereupon.