The eSign Solution works by leveraging DocMagic’s proprietary ClickSign technology, which has traditionally been used by borrowers to electronically execute agreements, disclosures and notices provided in conjunction with a mortgage transaction. DocMagic has taken this technology to a new level by enabling open access to this innovative system – for free.

“We developed eSign to be used for any document purely as goodwill for the industry, and we did it for free to encourage greater adoption of electronic signatures,” said Dominic Iannitti, president and CEO of DocMagic. “I strongly believe that our offering will revolutionize the way documents are signed by creating a domino effect among companies using it. We are laying the foundation for other software vendors to follow suit and our aim is to reduce the need to rely on paper and help organizations go green.”

Iannitti added: “Using our eSign solution to sign sensitive documents such as contracts, NDAs and proposals is as legally effective, valid and enforceable as documents that are printed and signed in ink. When multiple parties are involved in signing a document, that document is often printed several times, then faxed or emailed, and the process is repeated until all signatures are collected. This manual method will eventually become obsolete and we’re jump-starting that movement in the mortgage space.”

Setup and use of the platform is quick, easy and completely free to anyone interested in using it. An application programming interface (API) is available that provides a collection of XML-based Web services that enables seamless integration with any platform. As a result, data can easily be passed from eSign to various back-office systems. DocMagic’s eSign solution has been officially released and is now available at www.docmagic.com .

About DocMagic:
Founded in 1988 and headquartered in Carson, Calif., DocMagic, Inc., is a mortgage technology company that develops software, processes and web-based systems for the production and delivery of compliant loan document packages. DocMagic provides compliance expertise regarding the completion of all applicable forms and both guarantees and warrants that all agency forms are up-to-date and in compliance with GSE requirements. DocMagic’s compliance experts and in-house legal staff constantly monitor legal and regulatory changes at both the federal and state levels to insure accuracy. For more information on DocMagic, visit our website at www.docmagic.com . 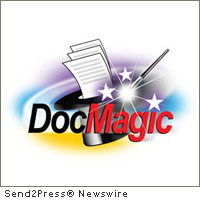 NEWS ARCHIVE NOTE: this archival news content, issued by the news source via Send2Press Newswire, was originally located in the Send2Press® 2004-2015 2.0 news platform and has been permanently converted/moved (and redirected) into our 3.0 platform. Also note the story “reads” counter (bottom of page) does not include any data prior to Oct. 30, 2016. This press release was originally published/issued: Wed, 28 Sep 2011 19:07:27 +0000