"Nutrient-rich, fresh food is critical to maintaining health and energy. Our goal is to show people how to grow superior produce within the urban environment while substantially reducing the impact of food production upon our planet," said Erik Cutter, Managing Director of Alegria Fresh.

GardenSoxx is an innovative organic food production system that can be used over cement or other man-made surfaces. The “Soxx” are made of eight inch diameter polypropylene mesh and can be filled with any compost or planting mix.

“Nutrient-rich, fresh food is critical to maintaining health and energy. Our goal is to show people how to grow superior produce within the urban environment while substantially reducing the impact of food production upon our planet,” said Erik Cutter, Managing Director of Alegria Fresh. “Systems employing GardenSoxx and hydroponic vertical farming processes are making this possible. 21st Century farmland may consist of man-made surfaces or unused spaces where food cannot be grown safely, so these highly efficient systems just may represent the farms of the future.”

The new Alegria Soxx farm consists of 13 rows of five Soxx each, for a total of 7,800 linear feet of growing space within an 8,500 square foot area (approximately one fifth of an acre). GardenSoxx drain easily and provide aeration and cooling to keep the root zone stable. The rich organic soil is supported within a controlled environment allowing greater nutrient density to be achieved and weed growth is reduced which decreases labor. Production yields are expected to be nearly double that of conventional farming. Water usage is estimated to be 70 percent less and fertilizer use 50 percent less. Other cost savings such as being weed-free are expected to increase the return on investment of the new urban microfarm.

Thirteen different specialty crops including several cultivars of beets, onions, red and green romaine, radicchio, red and green cabbage, chard, celery and kale are being grown to demonstrate the versatility of the system and prove that urban microfarms can be profitable with no subsidies required. The controlled growing environment assures superior nutrient-dense produce, high yields and faster growth rates. Alegria Soxx Farms create jobs and can be employed in densely populated urban environments to provide access to superior, locally grown food.

“The importance of preparing for a future with less water available cannot be overstated,” said A.G. Kawamura, prior CA Secretary of Agriculture and co-founder of Orange County Produce, LLC. “We are committed to continuing the legacy of farming in Orange County. By repurposing land and leveraging existing technology to increase efficiencies, we can provide practical solutions to supplement a worldwide food issue.”

Alegria Farm produces an exotic variety of leafy greens, medicinal herbs and heirloom vegetables. Hydroponic farming is soilless and utilizes coconut fiber instead of organic soil, and produces strong plants that are nutrient-rich. For more information on Alegria Fresh or to schedule a tour of the farm, please visit www.AlegriaFresh.com or follow on Facebook and Twitter. Alegria Fresh is the high-performance urban agriculture division of EnviroIngenuity, a company dedicated to reducing waste.

One of the oldest remaining farm companies in southern California, Orange County Produce, LLC, has farmed within the rural urban environment of OC for over half a century.

The company is managed by A.G. and Matthew Kawamura, third generation growers and shippers of fresh produce. A.G. Kawamura is the former California Secretary of Agriculture where he served from 2003 to 2010 and is actively involved in developing policy in the areas of education, hunger and nutrition. He serves as the co-chair of Solutions From the Land, a United Nations Foundation project that is developing a sustainable roadmap for 21st century agricultural systems.

Orange County Produce, LLC, engages in year-round production and marketing of fruits and vegetables. Dedicated team members work creatively to resolve hunger and nutrition problems within the local community and educate the public about the art and science of urban farming and the challenges facing our food system. Orange County Produce, LLC, is currently engaged in building an exciting, interactive urban agricultural exhibit at the Orange County Great Park in Irvine, California.

Filtrexx Corporation is a proven green technology firm that designs and manufactures products used in more than 100 applications. The Filtrexx GardenSoxx system uses locally made, annually renewable, bio-based, recycled compost and other organic materials, contained by the company’s Made in USA mesh containment system to create patented products used around the world. The all-natural Filtrexx system is currently in use in nine countries, including every US state and province in Canada. For more info, visit http://www.GardenSoxx.com/. 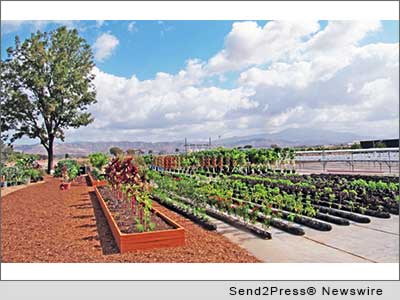 NEWS ARCHIVE NOTE: this archival news content, issued by the news source via Send2Press Newswire, was originally located in the Send2Press® 2004-2015 2.0 news platform and has been permanently converted/moved (and redirected) into our 3.0 platform. Also note the story “reads” counter (bottom of page) does not include any data prior to Oct. 30, 2016. This press release was originally published/issued: Mon, 31 Mar 2014 17:09:19 +0000

View More Agriculture News
"Nutrient-rich, fresh food is critical to maintaining health and energy. Our goal is to show people how to grow superior produce within the urban environment while substantially reducing the impact of food production upon our planet," said Erik Cutter, Managing Director of Alegria Fresh.