Selfies and Ellen, Farewell to Arms

"Ellen is the perfect user for the Quik Pod and hopefully she'll keep one in her back pocket in the future," says inventor Wayne Fromm.

HOLLYWOOD, Calif. and TORONTO, Ont., Canada, March 4, 2014 (SEND2PRESS NEWSWIRE) — Ellen DeGeneres was sent a selfie machine two years ago, she could have made history with it. The Quik Pod, from Fromm Works, Inc., the “ultimate selfie machine” as described by the inventor, is an extendable smartphone holder with a built in selfie mirror.

Inventor Wayne Fromm has supplied many celebrities with his invention, the Quik Pod, and knew it would be perfect for Ellen. She hammed it up in 2004 with Steven Spielberg during the Academy Awards, a time when the Quik Pod was still in development but Wayne Fromm had her in mind back then.

Inventor Wayne Fromm was approached by Ellen’s producer in 2010 and Quik Pods were rushed to the studio. Ultimately it was used on air by Jay Leno on the Tonight Show and was featured on the Today Show but Fromm always wanted Ellen to show it off. “Ellen is the perfect user for the Quik Pod and hopefully she’ll keep one in her back pocket in the future,” says Fromm.

Fromm’s project started before anyone even knew what to call a selfie, prior to the existence of Facebook, the iPhone or Instagram, The newest version of the world’s first handheld extendable arm, the Quik Pod Selfie Pole, includes a universal smartphone adapter that will fit Ellen’s Samsung Galaxy Note 3 and all iPhones, has a large built-in selfie mirror for self centering and is lightweight and compact. Works with all smartphones, compact cameras, DSLR and GOPRO® cameras.

Fromm was determined to fix the problem of off-center “selfies” and he was awarded a U.S. Patent for his invention. Instead of holding an arm out at maximum length to try and photograph oneself, like Bradley Cooper did, Quik Pod is an extension arm that produces a natural looking and perfectly centered shot. U.S. Patent No.: 7,684,694.

The photographer attaches the camera device, sets the self-timer, uses a self timer app or a remote control that Quik Pod offers, extends the Quik Pod, and then perfectly captures their own image as if another person is photographing them. There were more than hundreds of prototypes made before the first version was ever released.

Fromm Works, Inc. is an invention and design company that has marketed nearly fifty successful commercial products carrying such brands as Disney, Mattel and Nestle and is a proud supporter of Starlight Children’s Foundation.
Learn more at: http://www.quikpod.com/. 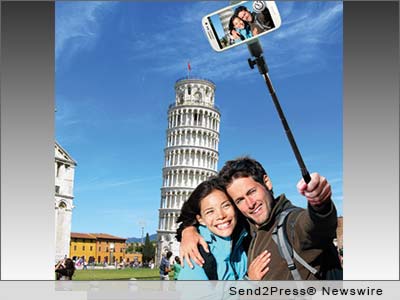 NEWS ARCHIVE NOTE: this archival news content, issued by the news source via Send2Press Newswire, was originally located in the Send2Press® 2004-2015 2.0 news platform and has been permanently converted/moved (and redirected) into our 3.0 platform. Also note the story “reads” counter (bottom of page) does not include any data prior to Oct. 30, 2016. This press release was originally published/issued: Tue, 04 Mar 2014 14:16:13 +0000

View More California Business News
"Ellen is the perfect user for the Quik Pod and hopefully she'll keep one in her back pocket in the future," says inventor Wayne Fromm.