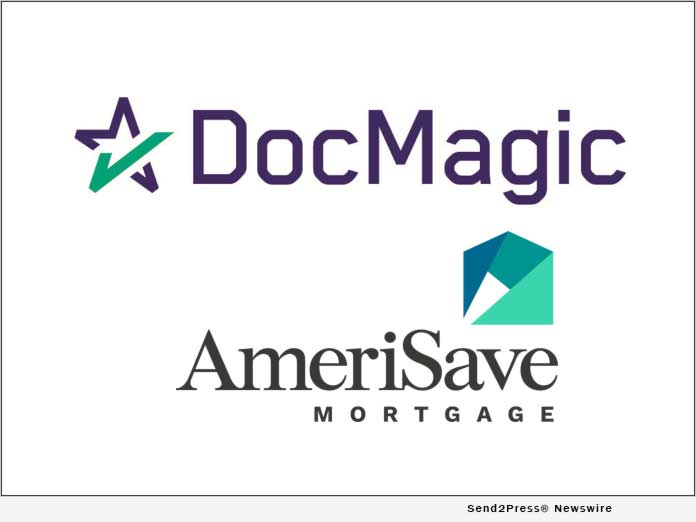 “DocMagic has been a wonderful partner to work with throughout the pandemic and re-fi boom, proving to be a key technology partner that has helped rapidly scale AmeriSave,” said AmeriSave CIO, Magesh Sarma. “We look forward to continuing our partnership with DocMagic to establish even more efficiencies for our customers and internal teams.”

DocMagic’s solutions integrate tightly with AmeriSave’s proprietary built loan origination system (LOS), which focuses heavily on streamlining the lending process by removing manual touch points using total workflow automation, task management, event triggers, auto calls to vendors, and more. Many of DocMagic’s functions automatically occur at the appropriate time within the workflow of AmeriSave’s LOS — without any human intervention whatsoever. This has maximized employee productivity throughout the lending process, not only with DocMagic but with many of AmeriSave’s vendor partners.

AmeriSave has effectively managed its growth by designing and implementing systems and processes that have been paramount to the company’s continued success. DocMagic’s Total eClose platform has helped AmeriSave expand during the re-fi boom and over the course of the pandemic, with simple and intuitive interfaces for borrowers.

“AmeriSave understands the importance of always ensuring that borrowers have as many options and tools as possible available at their fingertips to walk away with a good experience that ultimately creates repeat business,” stated Dominic Iannitti, president and CEO of DocMagic. “Everything we do at DocMagic places ease of use, simplification, and elegant design as a top innovation priority, which is reflected by AmeriSave’s ongoing achievements. We are elated that AmeriSave is having such immense success with our technology.”

Total eClose™ is DocMagic’s single-source eClosing solution. It fully automates the closing workflow while leveraging the precision-based accuracy of its intelligent, dynamic document generation capabilities and compliance engine. DocMagic ensures that data and docs are consistent and accurate throughout the origination and closing process.

AmeriSave has been very successful as an industry leader in digital origination with simplified self-service options for borrowers to engage the loan process directly. Ease of use among DocMagic’s solutions was cited by AmeriSave as a key component of the lender’s self-service consumer direct lending model. Its early adoption to go digital coupled with the company’s commitment to make attaining a home loan as easy as possible for borrowers has been widely recognized and lauded by borrowers. AmeriSave has consistently been ranked a leading lender in the mortgage industry for customer satisfaction, as rated by actual consumers.

View More Mortgage News
"DocMagic has been a wonderful partner to work with throughout the pandemic and re-fi boom, proving to be a key technology partner that has helped rapidly scale AmeriSave," said AmeriSave CIO, Magesh Sarma. "We look forward to continuing our partnership with DocMagic to establish even more efficiencies for our customers and internal teams."

LEGAL NOTICE AND TERMS OF USE: The content of the above press release was provided by the “news source” DocMagic, Inc. or authorized agency, who is solely responsible for its accuracy. Send2Press® is the originating wire service for this story and content is Copr. © DocMagic, Inc. with newswire version Copr. © 2021 Send2Press (a service of Neotrope). All trademarks acknowledged. Information is believed accurate, as provided by news source or authorized agency, however is not guaranteed, and you assume all risk for use of any information found herein/hereupon.