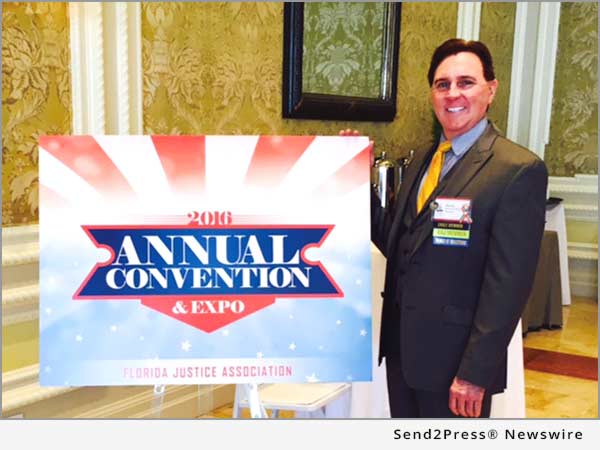 Held at The Breakers Palm Beach, the event draws Florida’s most experienced plaintiff’s attorneys from around the state. Featuring multiple events open to all members of the Florida Justice Association (FJA) as well as several meetings of board members and sub committees on a variety of topics related to the Florida Justice System and consumer and civil rights.

Items discussed during the board of directors meeting included several issues in the legislative, political and legal areas important for Florida citizens. Attorney Bernard Walsh and his fellow FJA board members discussed recent legislative changes to the Workers Compensation rules, how new rules on expert witnesses (Daubert vs Frey) will affect the courts, efforts to appeal legislative changes to the cost of obtaining medical records, and efforts to lift the regional based caps on medical mal-practice cases.

In addition to strategizing and planning the actions that the Florida Justice Association will take to support a strong civil justice system and protecting the rights of consumers, attendees of the FJY convention had access to a broad range of networking and continuing legal education credit (CLE) opportunities.

Attorney Bernard Walsh offered this comment about the convention, “While most people are unaware of the Florida Justice Association, many people across Florida are affected directly and indirectly by the work that we do. Every legislative season that goes by in Florida inevitably brings new efforts by the corporate insurance lobby to change the nature of the civil justice system in ways that will allow them to produce higher profits at the expense of Florida’s citizens. Since its inception, the FJA has rallied members of the civil justice system and members of the public to fend off these attacks on consumer protections and rights. Coming to the FJA meetings it is always reassuring to see so many excellent attorneys and legal professionals working to protect the public’s interests.”

View More Legal and Law News
"While most people are unaware of the Florida Justice Association, many people across Florida are affected directly and indirectly by the work that we do," says Bernard Walsh.

LEGAL NOTICE AND TERMS OF USE: The content of the above press release was provided by the “news source” Goldman Babboni Fernandez Murphy and Walsh or authorized agency, who is solely responsible for its accuracy. Send2Press® is the originating wire service for this story and content is Copr. © Goldman Babboni Fernandez Murphy and Walsh with newswire version Copr. © 2016 Send2Press (a service of Neotrope). All trademarks acknowledged. Information is believed accurate, as provided by news source or authorized agency, however is not guaranteed, and you assume all risk for use of any information found herein/hereupon.