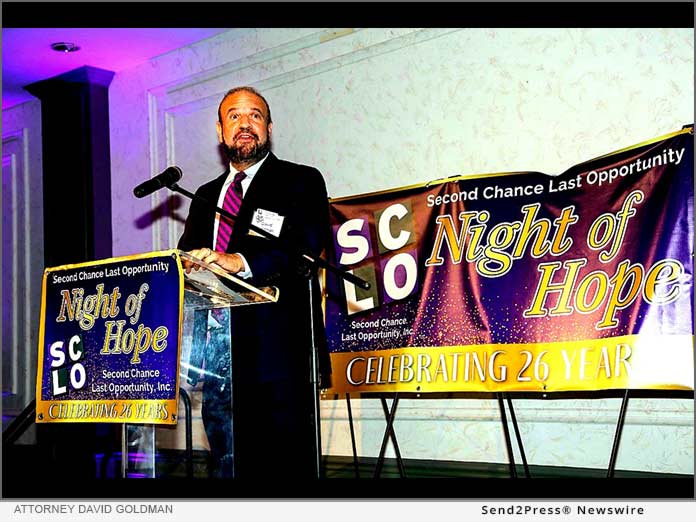 On the evening of Thursday, October 28, 2021 Second Chance Last Opportunity held a “Night of Hope” event to celebrate its 26th anniversary as a successful local 501(c)(3) charitable organization. The event took place at Michael’s On East restaurant and raised over $50,000.

A 25th Anniversary event had originally been planned the previous year but was cancelled due to covid. During the pandemic Second Chance transformed itself into an emergency crisis center and distributed food and other items such as toiletries and diapers multiple days a week.

Second Chance was founded by the organization’s CEO, Dr. April Glasco, and was originally a small storefront operation on MLK Jr. Blvd in Sarasota. Board Chairman, Attorney David L. Goldman, addressed the event crowd of over 150 attendees.

Goldman noted that the organization remained open throughout the pandemic and has served over 80,000 different individuals. A network of volunteers and suppliers was created to obtain and distribute the food and other supplies and remains intact to deliver services to those in need.

Goldman explained that despite the organization’s new and expanded role, Second Chance continues to provide all of the other services that it had come to be known for, such as its life skills management and job training classes to transition clients from homelessness to permanent employment.

In the past few years Second Chance has also focused on the problems faced by young women, offering classes and workshops to help young women break the shackles of dependence and bad influences. Additionally, Second Chance provides children’s programs such as its “Out of the Box” programs, as well as community festivals, art classes and more.

Goldman, a Sarasota personal injury attorney for more than 30 years, has been associated with Second Chance for more than 16 years, initially serving as a volunteer before joining the board. For the past several years, Mr. Goldman has served as board chairman during which time the organization has expanded the services it provides. The law firm of which Goldman is partner, (“Justice Pays”) was a Gold level sponsor of the event.

More on David Goldman at https://www.justicepays.com/

LEGAL NOTICE AND TERMS OF USE: The content of the above press release was provided by the “news source” Goldman Babboni Fernandez Murphy and Walsh or authorized agency, who is solely responsible for its accuracy. Send2Press® is the originating wire service for this story and content is Copr. © Goldman Babboni Fernandez Murphy and Walsh with newswire version Copr. © 2021 Send2Press (a service of Neotrope). All trademarks acknowledged. Information is believed accurate, as provided by news source or authorized agency, however is not guaranteed, and you assume all risk for use of any information found herein/hereupon.