Attorney Bernard Walsh had this to say about the event, "Few things are as important to maintaining a strong and ethical legal system than ensuring that the next generation of attorneys are fully prepared."

The event, held at Cooley Law School’s Tampa campus, featured a presentation given by John Fox of the Florida Justice Association (FJA) on the benefits and resources available to members of the FJA. The Florida Justice Association is an organization of plaintiff’s attorneys that is dedicated to strengthening and upholding Florida’s civil justice system and protecting the rights of citizens and consumers. To that end, the FJA makes available a wide variety of resources to it’s members including, continuing legal education opportunities, networking events, software tools and participation in Florida legislative initiatives.

Students also were given a lecture by Attorney Bernard Walsh on representing clients who have suffered a brain injury. The lecture included information on the latest medical imaging technologies essential for illustrating to a jury, physical damage done to the brain even at the cellular level.

Later, a panel of experienced attorneys spoke to the Cooley Law students about what an attorney looks for in graduating law students, how they should prepare their resumes, and what to expect during a job interview. Additionally, the panel also advised students on how to decide on an area of practice.

After the open forum discussion panel was concluded, students where invited to meet with the individual panel members for more in-depth questions and answers.

Attorney Bernard Walsh had this to say about the event, “Few things are as important to maintaining a strong and ethical legal system than ensuring that the next generation of attorneys are fully prepared. As students move toward graduation and beginning their careers, they will need to make important decisions about what area of law they would like to practice, and how to prepare themselves to stand out in a very competitive field.”

Partner at the Personal Injury and Civil Trial Law firm of Shapiro, Goldman, Babboni and Walsh, Bernard Walsh has helped hundreds of Floridians get fair compensation for injuries. Additionally, Bernard Walsh has won one of Florida’s largest motorcycle accident recoveries and has an AV Preeminent(R) rating on Martindale-Hubbel(R), a doctors and attorneys ratings website and is a Superb rated attorney with Avvo.com. 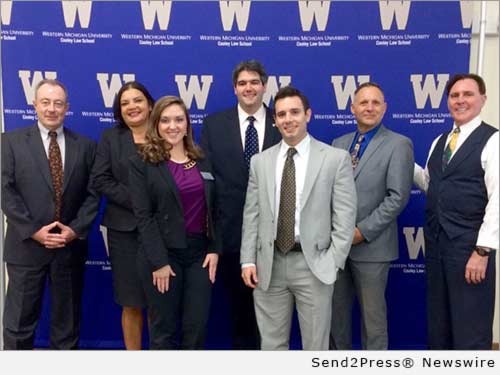 NEWS ARCHIVE NOTE: this archival news content, issued by the news source via Send2Press Newswire, was originally located in the Send2Press® 2004-2015 2.0 news platform and has been permanently converted/moved (and redirected) into our 3.0 platform. Also note the story “reads” counter (bottom of page) does not include any data prior to Oct. 30, 2016. This press release was originally published/issued: Fri, 19 Feb 2016 15:58:36 +0000

View More Education and Schools News
Attorney Bernard Walsh had this to say about the event, "Few things are as important to maintaining a strong and ethical legal system than ensuring that the next generation of attorneys are fully prepared."