IRVINE, Calif., Aug. 24, 2017 (SEND2PRESS NEWSWIRE) — 5 Bars Communities, a dba of XG Communities LLC, a premier provider of wireless master plans, asset marketing and engineering services for cities and municipalities across the United States, announced an agreement to market and manage wireless coverage solutions for the City of Berkeley, California. Throughout its history, Berkeley has been known for introducing creative change, that has later been adopted by other cities. 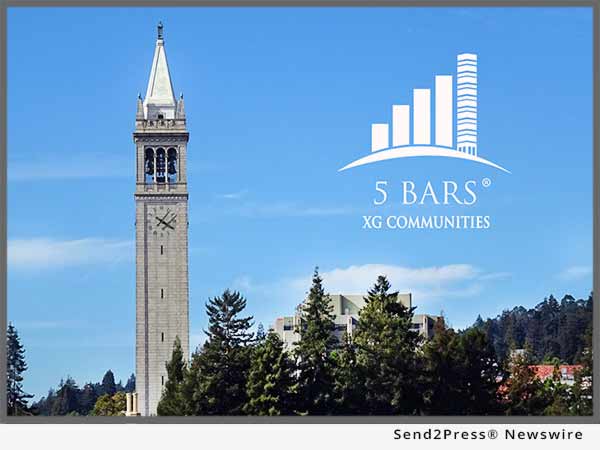 5 Bars Communities has entered into a multi-year agreement with the City of Berkeley and will begin marketing the city’s assets for small cell and wireless use. This effort will enhance the ability of Berkeley’s citizens to access high speed wireless connectivity throughout the city.

As wireless carriers densify existing networks, it is estimated that the industry will deploy hundreds of thousands of small cells, making it increasingly difficult for cities to manage the applications process. In collaboration with the carriers, 5 Bars will streamline applications with a predictable process while preserving aesthetics.

5 Bars will act as an advocate for the City, in collaboration with carriers, in order to minimize impact from wireless facility siting decisions. The decision for the City of Berkeley to partner with 5 Bars was based on maintaining control, preventing visual blight and increasing connectivity for businesses, residents and citizens. The solution will be the basis to deploy Smart City infrastructure, enhance business investment, and improve city services.

About the City of Berkeley:
A Northern California city on the San Francisco Bay, the City of Berkeley is a pioneer of many progressive feats and is ranked as one of the top best places to live in the nation. The city has a distinct cultural presence, it is a culinary hub, and home to the top public university in the nation, University of California Berkeley. Learn more: https://www.cityofberkeley.info/.