EDMOND, Okla., July 23, 2018 (SEND2PRESS NEWSWIRE) — NEXT Mortgage Events LLC, a creator of events for women mortgage executives, has announced that mortgage industry technology providers Credit Plus, DocMagic, Home Captain and Snapdocs collaborated as key benefactors in a charity effort that raised $1,500 for Girls Inc. of Metropolitan Dallas. Numerous NEXT attendees joined these companies in supporting the organization by making personal donations. 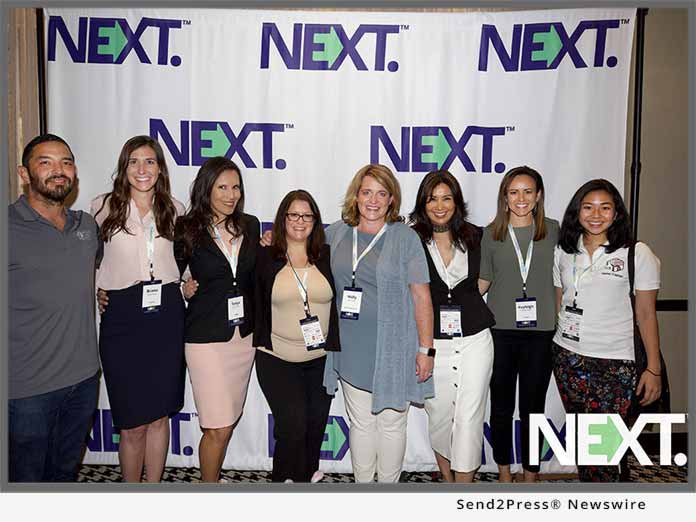 The NEXT/Girls Inc. of Metropolitan Dallas charity effort took place on June 21, 2018 during the official networking party at NEXT, the mortgage technology summit for women executives. NEXT’s June 2018 event was held at Hotel ZaZa in Uptown Dallas. Over 150 women executives in mortgage lending attended.

“Girls Inc. wish lists contain games and craft supplies totaling $1,500. Our goal was to sponsor an entire list and our sponsors and attendees made that happen,” said NEXT co-founder Jeri Yoshida. “For many NEXT attendees, giving back is a normal part of their lives. It’s great to see these accomplished women executives bonding as they’re giving back, together.”

Girls Inc. Dallas (https://girlsincdallas.org/) was originally established as Girls Club of Dallas as a response to the needs of low-income, inner city girls in the community. Since then, Girls Inc. of Metropolitan Dallas has provided high quality after school and summer programs for girls ages six to 18 from low-income communities in Dallas County.

About NEXT Mortgage Events LLC:
In January 2018, NEXT Mortgage Events broke the mortgage industry’s unspoken barriers that limit women’s access to competitive intel and networking-based information exchange, when it introduced NEXT, the mortgage technology summit for women. NEXT is a two-day, tech-focused symposium based on lenders sharing competitive intel with other lending executives. A boutique gathering, each NEXT event is limited to 165 attendees, and targets a select group of decision making executives. Approximately 85-90 percent of lender attendees hold a title of VP or higher and roughly 85 percent of attendees are women. NEXT is held twice a year, in winter and summer.

View More Mortgage News
"Girls Inc. wish lists contain games and craft supplies totaling $1,500. Our goal was to sponsor an entire list and our sponsors and attendees made that happen," said NEXT co-founder Jeri Yoshida.

More from NEXT Mortgage Events LLC

ABOUT THE NEWS SOURCE:
NEXT Mortgage Events LLC

NEXT Mortgage Events LLC is the creator of NEXT, the first bi-annual women's mortgage technology conference and expo. NEXT features informational tech-focused talks, a fast-paced tech demonstration showcase, a product-focused exposition hall and well-organized networking events - all in a comfortable environment catering to the accomplished woman executive.

LEGAL NOTICE AND TERMS OF USE: The content of the above press release was provided by the “news source” NEXT Mortgage Events LLC or authorized agency, who is solely responsible for its accuracy. Send2Press® is the originating wire service for this story and content is Copr. © NEXT Mortgage Events LLC with newswire version Copr. © 2018 Send2Press (a service of Neotrope). All trademarks acknowledged. Information is believed accurate, as provided by news source or authorized agency, however is not guaranteed, and you assume all risk for use of any information found herein/hereupon.