"This film remains a living document which captures the significance of palliative care as a compassionate response to the medical needs of those persons worldwide who are seriously ill or dying," says Chris Comeaux, chief executive officer of Four Seasons.

Founded in 1979, the Telly Awards are considered the premier award among film and video professionals working across a range of mediums. In 2015, the winners were selected from more than 12,000 entries from the United States and abroad by a panel of 650 industry peers who judge each work based on merit.

The Four Seasons Compassion for Life documentary features the cross-continental partnership between the leading North Carolina care provider, Flat Rock, and the Palliative Care Alliance of Zambia. Filmed on location in the sub-Saharan, southern African nation and North Carolina, the film highlights the global need to improve access to quality palliative care during serious illness or at end of life.

“We tell the best stories we possibly can,” says Dylan Trivette, also a former Emmy Award winner. “Filmmakers are tasked with bringing a spotlight onto key moments that speak to them. We look for projects like this one, which have resonance and heart outlasting the event itself.”

Zambia provides a compelling backdrop to the need for palliative care across the developing world. On average, Zambians have a life expectancy of 48 years, about half of that of North Carolinians, due to high incidences of HIV/AIDS, malaria, tuberculosis, and cancer.

“This film remains a living document which captures the significance of palliative care as a compassionate response to the medical needs of those persons worldwide who are seriously ill or dying,” says Chris Comeaux, chief executive officer of Four Seasons.

In Trivette’s view, the Telly Award is a gift to be shared with Four Seasons’ leadership, who played a crucial role both at home and in Zambia.

“It’s not our work, it is a collaborative effort. Four Seasons trusted us to tell this very important story, so this recognition is a testament to that collaboration. We’re honored to share in the gift of an award with them.”

About Trivette Images:
Trivette Images – http://trivetteimages.com/ – captures cinematic visuals with a documentary-inspired approach to produce award-winning films and behind-the-scenes footage for non-profits, corporations, and film studios around the globe

About Four Seasons Compassion For Life:
Four Seasons Compassion for Life – http://www.fourseasonscfl.org/ – is a 501c3 non-profit organization with a dedicated team of health care professionals, social workers, spiritual care professionals and volunteers deeply committed to its mission of “Co-Creating the Care Experience.” Nationally known for its leadership in innovative, quality hospice and palliative care services, and serving western North Carolina, the agency is a former Circle of Life award recipient from the American Medical Association. 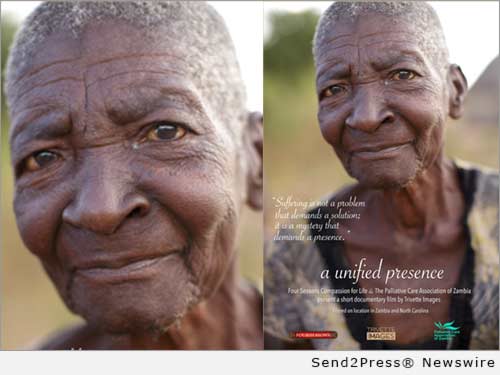 NEWS ARCHIVE NOTE: this archival news content, issued by the news source via Send2Press Newswire, was originally located in the Send2Press® 2004-2015 2.0 news platform and has been permanently converted/moved (and redirected) into our 3.0 platform. Also note the story “reads” counter (bottom of page) does not include any data prior to Oct. 30, 2016. This press release was originally published/issued: Thu, 03 Dec 2015 15:58:22 +0000

View More Awards and Honors News
"This film remains a living document which captures the significance of palliative care as a compassionate response to the medical needs of those persons worldwide who are seriously ill or dying," says Chris Comeaux, chief executive officer of Four Seasons.