"We are honored by and proud of this recognition," said John Hahn, EPIC's CEO. "It is a meaningful 'peer to peer' view of how we stack up nationally against other independent brokers."

SAN FRANCISCO, Calif., Aug. 13, 2015 (SEND2PRESS NEWSWIRE) — EPIC Insurance Brokers and Consultants, a retail property, casualty insurance brokerage and employee benefits consultant, has been ranked #12 among the Insurance Journal’s “Top 100 Independent Property Casualty Agencies.” The ranking is based on total property and casualty agency revenue for 2014 and includes only those agencies whose business is primarily retail not wholesale.

“We are honored by and proud of this recognition,” said John Hahn, EPIC’s CEO. “It is a meaningful ‘peer to peer’ view of how we stack up nationally against other independent brokers. Our growth and expansion lets EPIC deliver even more of the services our clients want and need, while creating added opportunity for our people,” he continued. “We had an incredible year in 2014 and the best is yet to come.”

About EPIC:
Headquartered in San Francisco, EPIC Insurance Brokers and Consultants has nationwide presence with a depth of industry expertise across key lines of insurance, including commercial property and casualty, employee benefits, unique specialty program insurance, and private client services. Since its founding in 2007, EPIC has grown revenue from $12 million to $160 million through both organic growth and strategic acquisitions, and remains a fixture on the insurance industry’s “Best Places to Work” lists. Its strategic partners include private equity firms The Carlyle Group and Stone Point Capital. 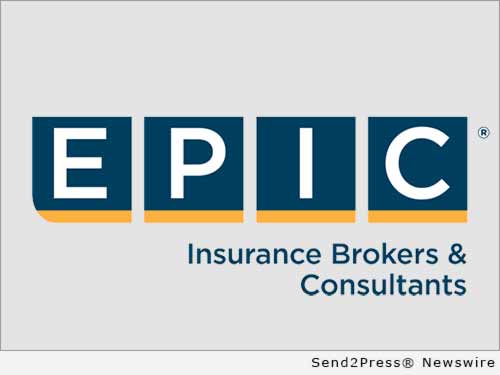 NEWS ARCHIVE NOTE: this archival news content, issued by the news source via Send2Press Newswire, was originally located in the Send2Press® 2004-2015 2.0 news platform and has been permanently converted/moved (and redirected) into our 3.0 platform. Also note the story “reads” counter (bottom of page) does not include any data prior to Oct. 30, 2016. This press release was originally published/issued: Thu, 13 Aug 2015 05:59:00 +0000

View More Banking News
"We are honored by and proud of this recognition," said John Hahn, EPIC's CEO. "It is a meaningful 'peer to peer' view of how we stack up nationally against other independent brokers."