HENDERSONVILLE, N.C., July 10, 2015 (SEND2PRESS NEWSWIRE) — In 1944, Joseph “Joe” Eyman, private first class, U.S. Army, wouldn’t remember the Fourth of July fireworks. The landing and firestorm on Utah beach of Normandy, France, on the 6th, however, was something he’d never forget, the veteran said during a pinning ceremony hosted by Four Seasons Compassion for Life, Flat Rock, this week.

The date marked his 19th birthday. This week, the 92-year-old veteran was honored in a pinning ceremony in gratitude of his service to his country by Four Seasons, represented by Ashley Newbrough, a music therapist who often visits the Eymans, together with retired U.S. Navy Commander Jerry Beschta of the Military Officers’ Association of America, or MOAA, Henderson County chapter.

The pinning ceremony was “a very special thing, as he was a World War II veteran,” says Beschta, who represented MOAA. Eyman is the 47th service veteran to receive the ceremony since November 2014.

The experience “made me feel kind of humble,” Eyman says. “What have I done to deserve all that notoriety?”

Annually, Four Seasons serves increasing numbers of veterans like Eyman who served in the United States Armed Forces who struggle serious, life limiting illness or who are at end of life.

“Veterans have distinctive needs, perhaps due to combat experiences, or other traumas,” says Jan Buchanan, a clinical specialist in spiritual care. “Four Seasons is honored to help veterans and their families find peace and closure regarding their military service.” 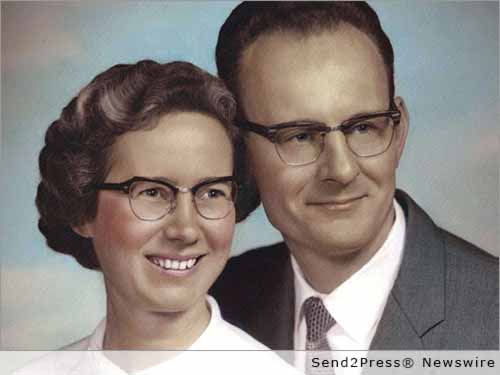 Approximately 800,000 North Carolinians are veterans, and more than 53 percent of North Carolina men aged 55 or older are veterans, according to the State Center for Health Statistics. Veterans comprise 25 percent of individuals who die in the United States annually, according to the National Hospice and Palliative Care Organization, which partnered with the U.S. Veterans’ Administration to create the “We Honor Veterans” program. Four Seasons became a national partner in the program last year.

Eyman’s service to his country – which included stations in Africa, Italy, England, France, Belgium, and Germany – wouldn’t end until the Nazis were defeated. When the war was over, he packed onto a crowded sailing vessel and returned to the United States and his family’s 95 acre farm in Missouri.

“It was somewhere to be quiet and peaceful,” he says, remarking that his experiences during his Army service “started an interesting history.”

“Because the weather had been so bad and the seas had been so rough, we were delayed making our landing by one day, until the early morning of June 6,” he would later recall in a written account of his experiences. “I have since told various people that I have never had so many fireworks on my birthday in my life.”

Like her husband, Ina Eyman served her country, working in a war plant in Bloomfield, N.J., as a draftsman, drawing blueprints of motors to be constructed for warships. She shares what she knows of the Utah Beach landing, when Joe was delivered to the shore in a “Duck,” an amphibious boat designed so that one end lowers a ramp to offload soldiers.

“They piled out will all their load of what they had to carry, and some of them couldn’t swim,” Ina says. “Some men died just landing because they didn’t know how to swim; others were weak swimmers and didn’t make it with those heavy packs on their backs.”

“He landed first in Africa, fighting Rommel, and that was pretty rough. Later, to have to survived the landing at Normandy was amazing, we suffered such huge losses,” says Beschta.

Normandy was particularly problematic by any measure. The Allied Forces had to cross a machine-gun riddled beach and scale a cliff into which the Germans had built bunkers.

“It was just a nightmare,” Beschta says. “Back then, soldiers didn’t wear protective vests or Kevlar. They just had their shirts on. And the noise – it was deafening, imagine 50,000 guns going off at the same time.”

The pinning ceremony recognition is a gift given and received from a place of deep gratitude, Buchanan says.

“I’m happy for so many good years,” says Eyman.

By 1950, Joe was working at Union College in wintry Lincoln, Nebraska, when a phone call was received at the Power House, the name for campus maintenance. The secretary to the music department asked that someone come and repair the heat, as “we had girls on the second floor doing piano lessons, and their little hands were getting cold,” says Ina, recalling that first meeting.

That year, the girls were to ask boys to the Valentine’s banquet. When Ina was asked to list her choices, she wrote “Joseph Eyman” as her first, second, and third choices for an escort.

“Guess who my date was?” she asks.

When she returned to Washington, D.C., to complete her education, the two would “write to each other and send back and forth recording tapes,” she says. “Then we finally sent a picture of each other.”

The letters would give way to a long courtship. Ina spent a week with Joe’s parents, and at the end of the week, the two returned to Union College to wait for Ina’s flight back east. Ina packed a picnic, and the two spent the afternoon in the park at College View, staying long after others began to leave.

“The moon came up, and he popped the question,” Ina says, giggling. “I was so excited that I missed my plane.”

The two have been happily married since 1956.

About Four Seasons Compassion For Life:
Four Seasons Compassion for Life – http://www.fourseasonscfl.org/ – is a 501(c)3 non-profit organization with a dedicated team of health care professionals, social workers, spiritual care professionals and volunteers deeply committed to its mission of “Co-Creating the Care Experience.” Nationally known for its leadership in innovative, quality hospice and palliative care services, and serving western North Carolina, Four Seasons is a former Circle of Life award recipient from the American Medical Association and a national “We Honor Veterans” partner since 2014. 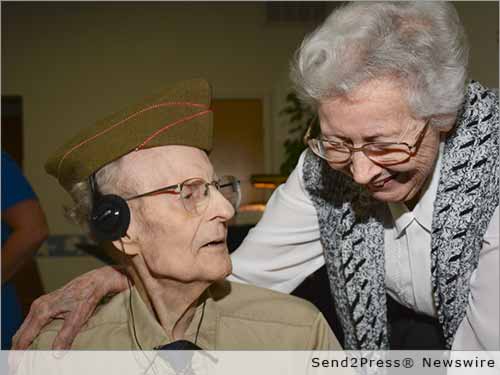 NEWS ARCHIVE NOTE: this archival news content, issued by the news source via Send2Press Newswire, was originally located in the Send2Press® 2004-2015 2.0 news platform and has been permanently converted/moved (and redirected) into our 3.0 platform. Also note the story “reads” counter (bottom of page) does not include any data prior to Oct. 30, 2016. This press release was originally published/issued: Fri, 10 Jul 2015 07:00:04 +0000