"The partnership focuses on improving access to quality palliative life care throughout Zambia," says Janet Bull, M.D., chief medical officer, who helped formulate the partnership, and who donated a 2012 Cunniff Dixon Foundation award of $25,000 to train and educate Zambian nurses and physicians to this end.

The Zambian partnership formed in 2011 to provide support to a country with limited access to this compassionate form of medical care. Then, in 2013, Four Seasons sent a medical mission team to Zambia to assist with care, develop strategy, and create a mutual vision to increase the reach of the Palliative Care Association of Zambia. For more information, visit http://www.fourseasonscfl.org.

Zambia is in the sub-Saharan, southern region of Africa.

Four Seasons partners with PCAZ because their missions align, according to Janet Bull, M.D., chief medical officer, who helped formulate the partnership.

“The partnership focuses on improving access to quality palliative life care throughout Zambia,” says Bull, who donated a 2012 Cunniff Dixon Foundation award of $25,000 to train and educate Zambian nurses and physicians to this end.

On average, Zambians have a life expectancy of 48 years, about half that of North Carolinians, and high incidences of HIV/AIDS, malaria, tuberculosis, and cancer. With fewer than 800 doctors nationwide, expert consensus is that the country’s medical system remains ill-equipped to take care of the needs of the seriously ill and dying.

Filmed on location in Zambia and North Carolina by Emmy award-winning Asheville filmmakers Dylan and Melanie Trivette, “A Unified Presence” highlights the collaborative effort of the two agencies to improve access to quality palliative care during serious, life-limiting illness or at end of life for individuals throughout Zambia.

For more information about Four Seasons Compassion for Life, Flat Rock, and its work in Zambia, visit http://www.fourseasonscfl.org/.

“A Unified Presence” premieres Tuesday, October 15, 2013 at Asheville Community Theater, from 6:30-9 p.m. The event includes the screening, a reception and discussion with filmmakers and members of the Four Seasons-Zambia partnership team. Tickets are available online, http://www.zambiafundraiser.com/ or at the door, $25. 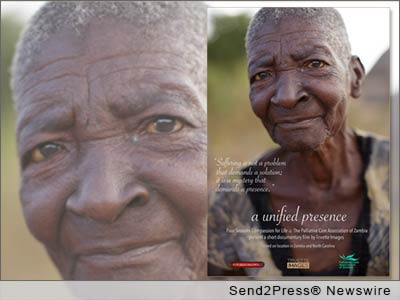 NEWS ARCHIVE NOTE: this archival news content, issued by the news source via Send2Press Newswire, was originally located in the Send2Press® 2004-2015 2.0 news platform and has been permanently converted/moved (and redirected) into our 3.0 platform. Also note the story “reads” counter (bottom of page) does not include any data prior to Oct. 30, 2016. This press release was originally published/issued: Thu, 26 Sep 2013 16:27:38 +0000

View More Asheville Business News
"The partnership focuses on improving access to quality palliative life care throughout Zambia," says Janet Bull, M.D., chief medical officer, who helped formulate the partnership, and who donated a 2012 Cunniff Dixon Foundation award of $25,000 to train and educate Zambian nurses and physicians to this end.