"Historically, the CPC model has been shown to improve outcomes for patients as well as the experiences of family and professional care providers, says Dot Moyer, chairman of the Four Seasons Board of Directors. "Four Seasons is being given an opportunity to prove the value of palliative care, and not only to the healthcare industry."

FLAT ROCK, N.C., May 22, 2014 (SEND2PRESS NEWSWIRE) — Four Seasons Compassion for Life today was notified they are the prospective recipients of a $9,596,123 grant award from the Center for Medicare and Medicaid Innovation, a program of the federal Department of Health and Human Services. The non-profit agency emerges as the sole hospice and palliative care provider nationwide chosen to implement health care reform over a three year period through its innovative community care model designed to deliver better care outcomes and lower costs.

The Four Seasons community palliative care model (CPC) removes barriers to patient care due to location, socio-economics, ethnicity or minority status, and fragility of medical condition. The model features interdisciplinary collaboration and the integration of palliative care into the health care system, continuity of care across transitions, and longitudinal, individualized support for patients and families – with the ultimate goals of increased quality of care and decreased hospital readmissions.

Historically, the CPC model has been shown to improve outcomes for patients as well as the experiences of family and professional care providers, says Dot Moyer, chairman of the Four Seasons Board of Directors.

“Four Seasons is being given an opportunity to prove the value of palliative care, and not only to the healthcare industry,” says Moyer. “The patients and families we serve report high satisfaction with their care experiences. Now the high quality of care for which we’re known will become increasingly valued and more widely available, not only in western North Carolina, but nationwide.”

Clinical and financial results of the project will be monitored through partnership with Duke University. The findings will translate into potential finance models to assist Medicare beneficiaries who struggle with advanced, life-limiting illnesses. The data generated will also provide national benchmarks for other palliative care organizations to improve patient outcomes.

The awarded project, formally titled “Increasing Patient and System Value with Community-based Palliative Care,” results from a community-academic partnership between lead investigators Janet Bull, M.D., chief medical officer with Four Seasons, Don Taylor, Ph.D., of the Duke Sanford School of Public Policy, and Amy Abernethy, M.D., of the Duke Center for Learning Health Care and the Duke University Medical Center. This project is the latest in a long line of productive collaborations between Four Seasons and Duke University that Bull and Abernethy began nearly a decade ago.

“Our goal is to translate this experience into a new palliative care financing approach to Medicare, one which is sustainable and replicable,” says Bull.

The implementation of the CPC model and the palliative care financing approach are expected to save the federal government more than $29 million in cost of care annually.

“The top 10 percent of Medicare beneficiaries account for over half of total program spending, and more than one-quarter of that spending is incurred during the last year of life,” he says. “The project is expected to directly reduce costs of care for patients with advanced or life limiting illness.”

The “Triple Aim” of higher quality, better service and lower costs are an achievement to which healthcare providers aspire. With its partners at Palliative Care Center and Hospice of Catawba Valley, Duke University, and other providers across western North Carolina, Four Seasons commits to making that aim a reality for the residents of its communities, says Comeaux.

Four Seasons Compassion for Life is a 501(c)3 non-profit organization with a dedicated team of health care professionals, social workers, spiritual care professionals and volunteers deeply committed to its mission of co-creating the care experience. Nationally known for its leadership in innovative, quality hospice and palliative care services, Four Seasons is a former Circle of Life award recipient from the American Medical Association. For more information, visit http://www.fourseasonscfl.org/. 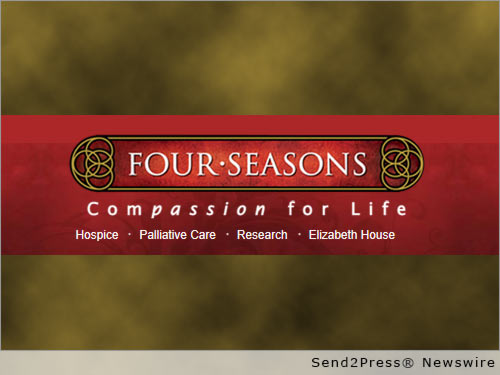 NEWS ARCHIVE NOTE: this archival news content, issued by the news source via Send2Press Newswire, was originally located in the Send2Press® 2004-2015 2.0 news platform and has been permanently converted/moved (and redirected) into our 3.0 platform. Also note the story “reads” counter (bottom of page) does not include any data prior to Oct. 30, 2016. This press release was originally published/issued: Thu, 22 May 2014 19:44:45 +0000

View More Awards and Honors News
"Historically, the CPC model has been shown to improve outcomes for patients as well as the experiences of family and professional care providers, says Dot Moyer, chairman of the Four Seasons Board of Directors. "Four Seasons is being given an opportunity to prove the value of palliative care, and not only to the healthcare industry."