LOS ANGELES, Calif., June 6, 2022 (SEND2PRESS NEWSWIRE) — Each June, Scientologists celebrate the Maiden Voyage of the Freewinds, a ship powered by the purpose: to help create a better world. 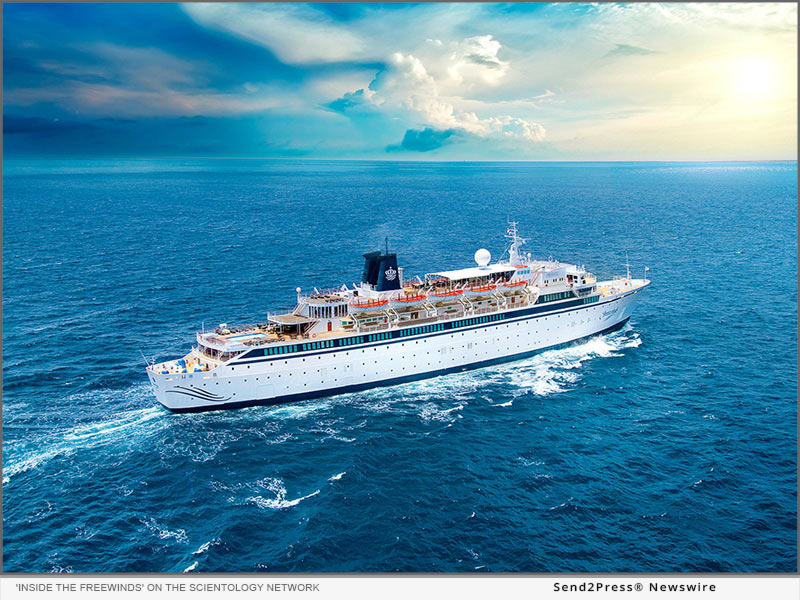 PHOTO CAPTION: Watch “Inside the Freewinds” on the Scientology Network.

The Freewinds is a religious retreat that serves Scientologists as the pinnacle of their journey to total spiritual freedom. Scientology Founder L. Ron Hubbard directed that the highest levels of the Bridge to Total Freedom be delivered in a distraction-free environment, off the crossroads of the day-to-day world. So it was that Scientology ecclesiastical leader Mr. David Miscavige saw to the purchase and retrofitting of the Motor Vessel Freewinds, which was christened on June 6, 1988.

From the top of her bridge to the depths of her engine room, the Freewinds is a ship powered by the purpose: to help create a better world. With its state-of-the-art navigation system, manned by some of the most competent sailors on the sea, this is a ship that uplifts communities wherever she puts in. Sailing under the flag of the Sea Organization, the Church’s religious order, the Freewinds forwards Scientology humanitarian goals, helping to shape the fate of entire nations.

Civic and religious leaders from throughout the Caribbean and Latin America recognize the Freewinds as a place of profound personal renewal, and as a source of solutions to meet their needs through the Church’s humanitarian programs and interfaith initiatives.

When the pandemic struck in 2020, the Freewinds was in Aruba. She rapidly geared up to clean and sanitize schools, healthcare centers, shelters, fire and police stations, museums, nonprofits, businesses and public facilities. And her Volunteer Ministers distributed thousands of copies of educational booklets to prevent the spread of the coronavirus through the island. The response was so effective that Aruba’s Director of Tourism and Public Health credited the work of the Freewinds with enabling the island to reopen its borders to tourism and trade.

In launching the Scientology TV Network in March 2018, David Miscavige promised that the channel’s programming would take people “into our Churches, spanning 167 countries on six continents… behind the scenes and into our Church management, publication and dissemination facilities, humanitarian outreach centers and programs…” with the network’s original series Destination: Scientology and Inside Scientology.

So, on the 34th anniversary of the ship’s Maiden Voyage, watch Inside Scientology: The Freewinds on the Scientology Network. And see just why its yearly anniversary is celebrated by leaders throughout the Caribbean and Scientologists everywhere.

Since launching, the Scientology Network has been viewed in 240 countries and territories worldwide in 17 languages.

CAPTION: Watch “Inside the Freewinds” on the Scientology Network.