"Alzheimer's is an out-of-control epidemic and we need to face that," says Denise Gott, CEO of ACSIA Partners. "It's tragic for victims and disruptive for their families. Why? Because it's a progressive disease that triggers the need for care as symptoms worsen."

According to data supplied by the Alzheimer’s Association:
* Alzheimer’s and other forms of dementia afflict one in nine Americans age 65 and older, and one in three age 85 and older.
* It kills more than prostate cancer and breast cancer combined.
* It’s the only disease among the top ten causes of death in America that cannot be prevented, cured or even slowed.
* From 2000 to 2013, while death from other diseases decreased, death attributed to Alzheimer’s increased by 71 percent.

In addition, Alzheimer’s is a leading reason people need long-term care. About one in four long-term care insurance claims are due to Alzheimer’s, according to the Society of Actuaries. As 77 million Baby Boomers age, millions of families will have to provide long-term care personally or pay others to do it.

“Alzheimer’s is an out-of-control epidemic and we need to face that,” says Denise Gott, CEO of ACSIA Partners. “It’s tragic for victims and disruptive for their families. Why? Because it’s a progressive disease that triggers the need for care as symptoms worsen.”

At some point, people with Alzheimer’s may forget to eat, or have trouble bathing or toileting. Someone will have to help them, which is where advanced planning can help.

Gott views her company’s role as primarily educational. “We help people assess their risk and plan accordingly. If long-term care insurance makes sense for them, we help them choose the right carrier and policy.”

The company’s three-day conference will brief its agents on how best to help clients address the Alzheimer’s issue. Keynote speeches will be made by Brett Cullen and Erich Hover, co-producers of “It Snows all The Time,” a feature film about Alzheimer’s, submitted to the Sundance Film Festival. The two also play lead roles in the film.

In 1983, Cullen was cast as Bob Cleary in the blockbuster miniseries “The Thorn Birds,” leading to a string of TV credits including “Falcon Crest,” “Criminal Minds,” and “Person of Interest.” On the silver screen he has starred in films including “Apollo 13,” “The Dark Knight Rises,” “42” and “The Guilt Trip” with Barbra Streisand.

Hover had his first movie break acting alongside Brad Pitt and Philip Seymour Hoffman in “Moneyball.” His experience with Alzheimer’s in his family motivated him to co-produce “It Snows All the Time” and immerse in the lead role of Jesse.

On January 16, the fund-raising event “Wiggin’ Out” will be held in a local performance space. The company’s 150 agents, normally serious, will mingle wearing wigs of purple (the color symbolizing Alzheimer’s) to call attention to the mounting crisis. Proceeds from ACSIA Partners and sponsoring carriers will be donated to the Alzheimer’s Association Capital of Texas chapter. Media representatives are welcome.

About ACSIA Partners LLC:
ACSIA Partners is one of America’s largest and most experienced long-term care insurance agencies serving all states. The company is also a co-founder and sponsor of the “3in4 Need More” campaign, which encourages Americans to form a long-term care plan. Learn more at: http://www.acsiapartners.com/. 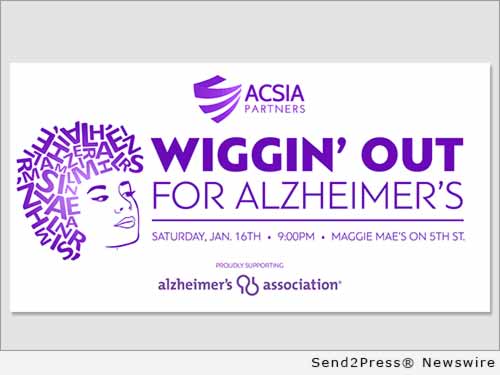 NEWS ARCHIVE NOTE: this archival news content, issued by the news source via Send2Press Newswire, was originally located in the Send2Press® 2004-2015 2.0 news platform and has been permanently converted/moved (and redirected) into our 3.0 platform. Also note the story “reads” counter (bottom of page) does not include any data prior to Oct. 30, 2016. This press release was originally published/issued: Mon, 28 Dec 2015 12:30:27 +0000

View More Finance News
"Alzheimer's is an out-of-control epidemic and we need to face that," says Denise Gott, CEO of ACSIA Partners. "It's tragic for victims and disruptive for their families. Why? Because it's a progressive disease that triggers the need for care as symptoms worsen."