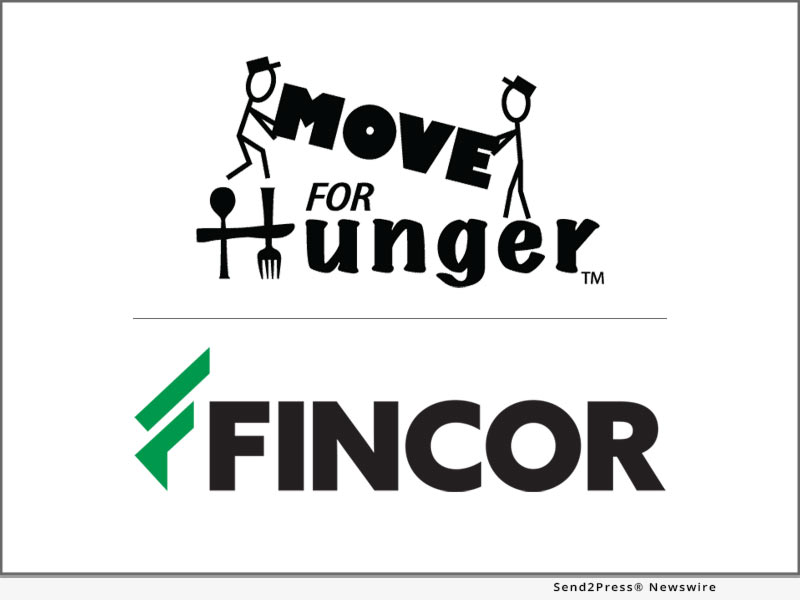 Move For Hunger was founded in 2009 by Adam Lowy, and has provided more than 26 million pounds of food, equaling over 22 million meals, to food pantries and banks across the United States. Since the pandemic started, Move For Hunger has had to meet the growing need of food insecurity in the United States and Canada, where 42 million Americans and 1 in 8 Canadians struggle with hunger.

This is their second year of partnership, and FINCOR has provided more than 50,000 meals to food insecure communities throughout the United States. They’ve also helped with transporting donations to food banks, transferring more than 1,900 pounds of food in 2021.

Move For Hunger has more than 1,000 moving companies as part of their mover network, with more than 4 million pounds of food, equaling over 3.5 million meals, collected and delivered by the program in 2021.

“Our partnership with FINCOR has been proven to be very beneficial,” said Adam Lowy, Executive Director and Founder of Move For Hunger. “They’ve demonstrated their dedication to the fight against hunger through their partnership, and we’re looking forward to what 2022 has in store!”

Through the support of partners like FINCOR Construction, Move For Hunger can continue to make a difference throughout the United States and Canada at such a pivotal point in time.

About Move For Hunger

Move For Hunger is working to end hunger and food waste in America.  42 million Americans struggle with hunger while 35% of the food produced in this country goes to waste. By mobilizing moving companies, multifamily apartment communities, corporations, and volunteers, Move For Hunger has delivered more than 26 million pounds of food to food banks – providing 22 million meals for those in need.

Get your company involved by registering to hold a food drive, fundraiser, or team building opportunity.  You can also simply make a donation to help end hunger. Visit Move For Hunger’s website to learn more about their work at https://moveforhunger.org/.

Since 2004, FINCOR has renovated, repaired, and repositioned thousands of properties in more than ten different states from the Southeast through the Mid Atlantic and into the Northeast and New England. Operating specifically in the multi-family sector, we specialize in upgrading every aspect of facilities from leasing offices, common areas and fitness centers, to dog parks, playgrounds and California kitchens. Along with the facilities themselves, we are experts in individual and multi-unit improvements including Occupied Interior Renovations that provides full-apartment renovation without interfering with current tenants or incurring rent-loss.

View More NonProfit and Charities News
"Our partnership with FINCOR has been proven to be very beneficial," said Adam Lowy, Executive Director and Founder of Move For Hunger. "They've demonstrated their dedication to the fight against hunger through their partnership, and we're looking forward to what 2022 has in store!"