CEO Mark Stephens said, "This acquisition affords our company to literally service half of the geography of the great State of Ohio - an area already very near and dear to our interest and our hearts."

HUNTINGDON VALLEY, Pa., June 3, 2013 (SEND2PRESS NEWSWIRE) — Multi-Flow Industries announced that it has completed the acquisition of one of the largest Independent Fountain-Dispensed Beverage Distributors in Ohio. This acquisition affords Multi-Flow Industries the distribution opportunity to directly service customers in Central Ohio, building upon their current distribution in Southern Ohio and Northern Kentucky.

CEO Mark Stephens said, “This acquisition affords our company to literally service half of the geography of the great State of Ohio – an area already very near and dear to our interest and our hearts.”

The acquired distributor, Multi-Flow of Columbus, had been independently owned and operated by Jeff and JoAnne Crair for over 39 years. In 1975, Jeff Crair took mentorship from Sam Gottlieb, the founder of Multi-Flow Industries. Crair chose Columbus, Ohio, to launch his operation. He cultivated his business with his first customer in 1975, and eventually built an expansive customer following, using Multi-Flow Industries as his primary supplier.

Jeff Crair said that, “Although this wasn’t an easy decision, we have chosen to move on to the second phase of our lives-retirement.”

The current Columbus customers will enjoy the same quality beverages that they have purchased in the past. Stephens reiterated that Columbus will see very few changes initially, giving credit to the management team in Central Ohio.

Multi-Flow Industry Director of Retail Sales, Dennis Nahill, said that the Company is in no way associated with Multi-Flow Ohio or Buckeye Beverages, which is head-quartered in Cleveland, Ohio. “It sounds complicated,” Nahill said, “but Multi-Flow Industries is now the only company distributing Multi-Flow branded products in Central and Southern Ohio.”

More information on Multi-Flow can be found on the company website at http://www.multiflow.net/ . 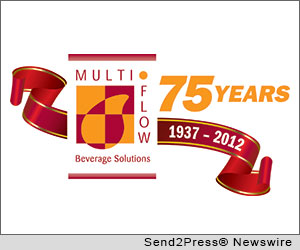 NEWS ARCHIVE NOTE: this archival news content, issued by the news source via Send2Press Newswire, was originally located in the Send2Press® 2004-2015 2.0 news platform and has been permanently converted/moved (and redirected) into our 3.0 platform. Also note the story “reads” counter (bottom of page) does not include any data prior to Oct. 30, 2016. This press release was originally published/issued: Mon, 03 Jun 2013 17:02:18 +0000

View More Business News
CEO Mark Stephens said, "This acquisition affords our company to literally service half of the geography of the great State of Ohio - an area already very near and dear to our interest and our hearts."

LEGAL NOTICE AND TERMS OF USE: The content of the above press release was provided by the “news source” Multi-Flow Industries or authorized agency, who is solely responsible for its accuracy. Send2Press® is the originating wire service for this story and content is Copr. © Multi-Flow Industries with newswire version Copr. © 2013 Send2Press (a service of Neotrope). All trademarks acknowledged. Information is believed accurate, as provided by news source or authorized agency, however is not guaranteed, and you assume all risk for use of any information found herein/hereupon.