PHOENIX, Ariz., March 11, 2019 (SEND2PRESS NEWSWIRE) — Move For Hunger announced today that registration is now open for the first annual Arizona Truck Pull. The event, in which teams of 5-10 will compete to see who can pull a moving truck 100 feet in the fastest time, will be hosted by Beltmann Relocation Group and the Arizona Relocation Alliance at Uncle Bear’s Brewery in Gilbert on Saturday, April 13, 2019 from 2 – 6 p.m. 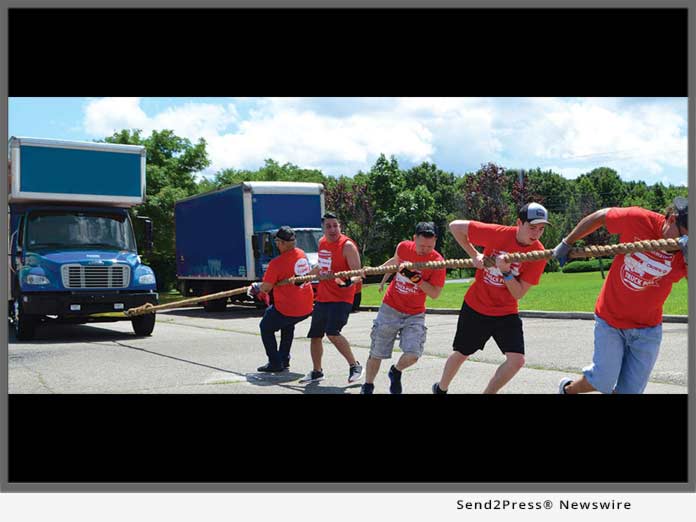 Registration is $200 per team and can be completed at http://AZTruckPull.com. Proceeds from the event will benefit Move For Hunger, a national non-profit organization that mobilizes the relocation industry to reduce food waste and fight hunger.

“In previous years, the employees of Beltmann did most of the heavy lifting to get money and food together to make a difference, which we loved,” says Beltmann Phoenix’s General Manager, Steve Rinaldo. “However, the inaugural truck pull contest is a fun and engaging way to pull in community support this year, and hopefully beyond.”

People tend to throw a lot of “stuff” away when they move, including perfectly good food. As a member of Move For Hunger’s national network of relocation professionals, Beltmann Relocation Group provides their customers with the opportunity to donate unopened, non-perishable food during the moving process and volunteers to deliver the donations to the local food bank, free of charge.

More than 1 million people in Arizona, including 1 in 5 children, are food insecure – meaning they lack reliable access to a sufficient quantity of affordable, nutritious food. Meanwhile, 40 percent of all the food produced in the United States each year is wasted. Since joining Move For Hunger in 2012, Beltmann Relocation Group has delivered more than 41,000 lbs. of food to the Hope For Hunger Food Bank, which is enough to provide 34,700 meals.

About Move For Hunger:
Move For Hunger is a 501(c)(3) non-profit organization that mobilizes the relocation industry to fight hunger and reduce food waste. In addition to collecting food from people who are moving to new homes, Move For Hunger helps companies and individuals across the United States and Canada organize successful food drives. To date, they have collected more than 13 million pounds of food. For more information, or to find out how you can host your own food drive, visit https://www.MoveForHunger.org.

About Beltmann Relocation Group:
Beltmann Relocation Group (http://www.beltmann.com) is one of the oldest and largest agents for North American Van Lines. Headquartered in Minneapolis, the company delivers relocation solutions to thousands of individuals, families and corporate clients each year. Beltmann Relocation Group has 12 strategic locations with nationwide resources allowing them to control the quality of moves from beginning to end.  Owned and operated by the Battina family since 1955, Beltmann Relocation Group, with more than 60 years of consistent profitability and strong leadership, combined with one of the largest household goods hauling fleets, technological advancements and commitment to customer satisfaction is a proven leader in the moving industry.

View More NonProfit and Charities News
"In previous years, the employees of Beltmann did most of the heavy lifting to get money and food together to make a difference, which we loved," says Beltmann Phoenix's General Manager, Steve Rinaldo.

LEGAL NOTICE AND TERMS OF USE: The content of the above press release was provided by the “news source” Move For Hunger or authorized agency, who is solely responsible for its accuracy. Send2Press® is the originating wire service for this story and content is Copr. © Move For Hunger with newswire version Copr. © 2019 Send2Press (a service of Neotrope). All trademarks acknowledged. Information is believed accurate, as provided by news source or authorized agency, however is not guaranteed, and you assume all risk for use of any information found herein/hereupon.