"For 30 years Sidney Ettedgui of the Manatee County Sheriffs Office has been organizing this event and takes great pride in its growth over the years," said Attorney David L. Goldman.

Organized by the Manatee County Sheriffs Office, the annual event is a benefit held for terminally ill children and their families. The festivities feature a lunch and several live performances. The performances included holiday music from a children’s choir and played by bagpipers, while Santa’s elves and clowns entertained the children.

Held at the Sarasota/Bradenton Airport the event culminates with the arrival of Santa Claus by helicopter. After landing Santa meets with each child and their family to give them a wish list of toys and presents they had requested in their letters to Santa.

This was the 30th anniversary of “Flight to the North Pole,” and over 300 children were able to meet with Santa who personally delivered them their presents. There are 117 families that participated, each having a terminally ill child whose uncertain and precarious futures are given a brief moment of magic and joy.

Attorney David L. Goldman had this to share about the event, “For 30 years Sidney Ettedgui of the Manatee County Sheriffs Office has been organizing this event and takes great pride in its growth over the years, and in the support received by the Manatee County Sheriffs Office and countless others who volunteer their time and services to make the event such a success. To see the community come together to help these children is truly touching and heartwarming.”

*CAPTION: Santa Claus Arrives at the Sarasota/Bradenton Airport to visit with terminally ill children during a benefit entitled “Flight To The North Pole.” 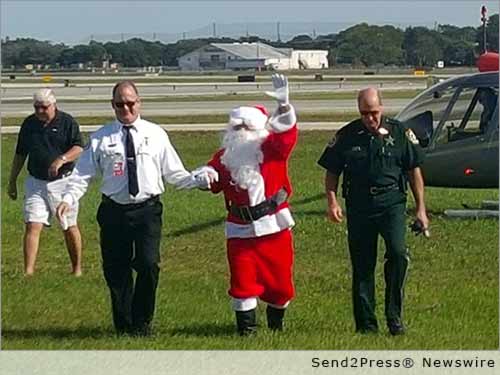 NEWS ARCHIVE NOTE: this archival news content, issued by the news source via Send2Press Newswire, was originally located in the Send2Press® 2004-2015 2.0 news platform and has been permanently converted/moved (and redirected) into our 3.0 platform. Also note the story “reads” counter (bottom of page) does not include any data prior to Oct. 30, 2016. This press release was originally published/issued: Wed, 16 Dec 2015 13:39:02 +0000

View More Florida Business News
"For 30 years Sidney Ettedgui of the Manatee County Sheriffs Office has been organizing this event and takes great pride in its growth over the years," said Attorney David L. Goldman.

LEGAL NOTICE AND TERMS OF USE: The content of the above press release was provided by the “news source” Shapiro Goldman Babboni Fernandez and Walsh or authorized agency, who is solely responsible for its accuracy. Send2Press® is the originating wire service for this story and content is Copr. © Shapiro Goldman Babboni Fernandez and Walsh with newswire version Copr. © 2015 Send2Press (a service of Neotrope). All trademarks acknowledged. Information is believed accurate, as provided by news source or authorized agency, however is not guaranteed, and you assume all risk for use of any information found herein/hereupon.