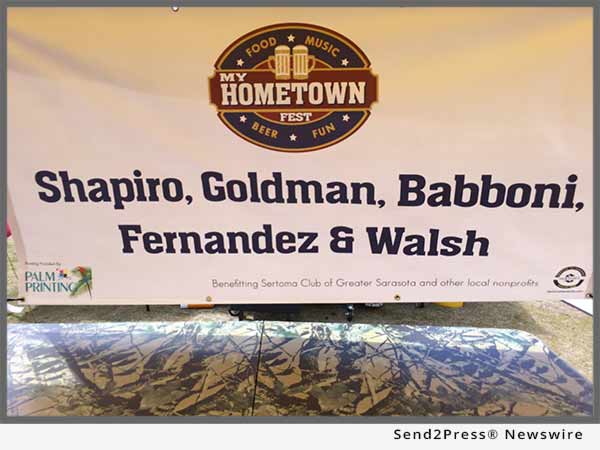 The Personal Injury and Civil Trial Law Firm of Shapiro Goldman Babboni Fernandez & Walsh were one of the sponsors of the second annual “My Hometown Fest.” Held at Benderson Park in Sarasota, Florida, the My Hometown Festival drew more than 4000 visitors to the event which featured live music, a wide variety of vendors from the Sarasota area and other participating locations offering food and beverages unique to their home regions.

In addition to the entertainment and festivities, the event organizers sought to raise at least $25,000 dollars in support of the Sertoma Club of Greater Sarasota and its Sertoma Kids Clinic. As 501(c)(3) nonprofits, both organization serve children and others in our community who suffer from speech, language and hearing disabilities.

In support of the Sarasota area community and the efforts of the Sertoma Kids Clinic, the personal injury and civil trial law firm Shapiro Goldman Babboni Fernandez & Walsh were one of the sponsors at the event.

Attorney Bernard Walsh from the Bradenton office of the law firm had this to say about sponsoring the event, “With offices all through the Greater Sarasota area, Bradenton and St. Petersburg we feel it’s important to give back to the local community we serve. The Sertoma Club does excellent work in helping children with speech and hearing disabilities.

“Many people do not realize both the impact even a slight hearing or speech issue can cause for children in school as well as the large number of people affected by hearing and speech issues. The My Hometown Fest was a great event and we are happy to have contributed to its success and are looking forward to next years’ event.”

View More Corporate Social Responsibility News
"The My Hometown Fest was a great event and we are happy to have contributed to its success and are looking forward to next years' event," said Attorney Bernard Walsh.