MAYFIELD, Ky., Dec. 20, 2021 (SEND2PRESS NEWSWIRE) — Scientology Volunteer Ministers headquarters in Los Angeles encourages trained Volunteer Ministers to respond to one of the most devastating U.S. tornado outbreaks on record. Entire towns were all but wiped off the map leaving thousands homeless. 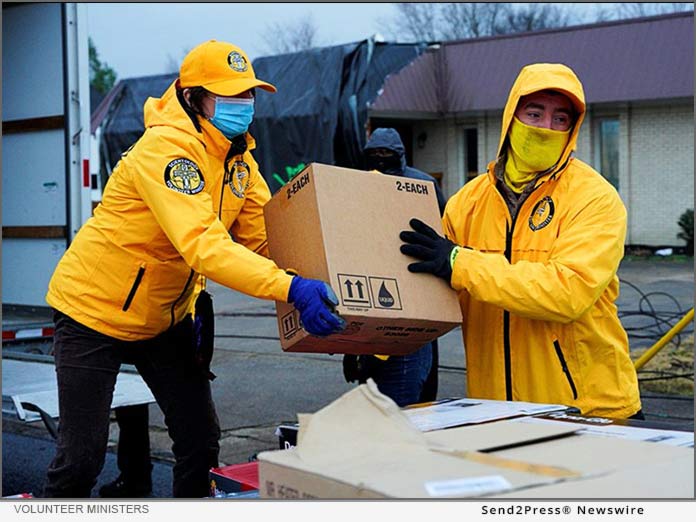 PHOTO CAPTION: A truck filled with generators and heaters drove up to the tent for help getting them into the hands of those in need. Volunteer Ministers helped unload the truck to get these precious gifts into the hands of families.

A U-Haul filled with 100 generators, heaters and propane tanks pulled up to the bright yellow tent at the corner of 8th and Walnut in Mayfield, Kentucky. Volunteer Ministers helped unload the truck’s precious contents, all of which found homes that day along with the 2,900 hot meals the volunteers handed out.

Volunteer Ministers (VMs) have arrived from the Scientology Churches in Nashville, Tennessee; Cincinnati, Ohio; and Twin Cities, Minnesota. And VMs pulled in to Mayfield from Austin, Texas, on Saturday with 4,000 donated items.

The rain that brought the tornado outbreak has continued for most of the past week. To lift people’s spirits, Good decided to make hot coffee and cocoa available and when she arrived at the checkout to pay for two coffee pots, 13 pounds of coffee and hot chocolate, Walmart paid the tab.

“It’s been like that since we arrived,” she says. “The generosity and outpouring of help is heartwarming.”

One of the Volunteer Ministers helped a woman who was devastated that the town she has lived in for 30 years had just been destroyed. Using a simple Scientology assist, a technique developed by Scientology Founder L. Ron Hubbard to relieve distress through addressing the emotional and spiritual factors in stress and trauma, he was able to bring her from grief to laughter in just a few minutes.

At the request of a pastor whose church was destroyed by the tornado, VMs cleared out the yard around the church so he can put up tents for parishioners in need of shelter. And whenever there is a lull in the rain, volunteers rush out to lay tarps on the roofs of houses that were damaged but not destroyed.

In addition to their work in Mayfield, Kentucky, the town hardest hit by the outbreak, Volunteer Ministers are also serving 70 miles away in Dawson Springs and in Bowling Green.

*Photo Caption: A truck filled with generators and heaters drove up to the tent for help getting them into the hands of those in need. Volunteer Ministers helped unload the truck to get these precious gifts into the hands of families.