"Sokal Media Group and our digital division, Webstreak is a fully integrated advertising/digital marketing agency that allows dealers to have a holistic approach to their communications," says CEO Mark Sokal.

RALEIGH, N.C., May 5, 2016 (SEND2PRESS NEWSWIRE) — One of the largest automotive marketing agencies in the East is on the move again. Sokal Media Group has relocated its headquarters to 11550 Common Oaks Drive in Raleigh. The move consolidates more than 80 of their more than 100 employees in a newly designed, spacious, 20,000 square foot environment.

Sokal Media Group founder and CEO Mark Sokal moved to Raleigh with his family in 2003 from New Jersey. “I owned a Kia store when the terrible events of 9/11 occurred at The World Trade Center. Like many businesses in the Tri-State Area, we suffered a loss of business in the months that followed. But for us, our business simply never came back. It was a very painful time.”

Sokal eventually found work as a sales manager in another dealership. “It was a fine relationship, however I was still very upset about having lost a business that was mine,” said Sokal.

But a friend and fellow member of his church would lead he and his family in a new direction. “My friend had been employed by the City of New York. He had to comb through the Twin Towers debris field every day, a gruesome job. I know how depressed he had been.” But in 2003 Mark’s friend seemed like a new person. “He told me he was shifting gears and moving his family to North Carolina. He talked about a more favorable cost-of-living, family values and the warmer climate. I liked what I was hearing,” said Sokal. “It seemed that God was showing us a new way forward, leading us in a new direction.” It was time to leave New Jersey.

In an old, used car and little money in their checking account, the Sokals and their three children headed for North Carolina. “We spent a lot of days searching for a rental home suitable for our family. It was daunting,” said Cindy Sokal, Mark’s wife and partner. “I prayed for God to give us a sign that we were on the right path. Were we hearing what God was really saying to us?”

The answer came quickly. The Sokals found a perfect home in South Raleigh. Cindy recalls, “We were standing on the front lawn finalizing the rental agreement when I looked up and saw a rainbow shining brightly over the roof.” God had answered their prayers.

“I had another soul-searching choice to make,” said Mark. “Should I sell cars again? I really needed work.” With counsel and encouragement of his associates in the advertising industry, Mark thought he might better serve his family and new home by re-positioning himself as an automotive marketing advisor.

“One of the New Jersey advertising agencies I had worked with believed in me and, just like the character Kevin Costner plays in the movie ‘Dances with Wolves,’ I was the lone outpost, representing that firm here in Raleigh,” said Sokal. But cold calling on businesses was very different from having car buyers coming to one’s store. “After some disappointing attempts, I really didn’t think I had what it takes.”

Encouraged by an advertising agency friend, Mark came to realize that he had plenty to offer…something no other ad agency rep could provide: first-hand knowledge of the dealer’s business. As he embraced this principle he saw that area dealership owners were eager to hear what he had to say. “I also had a lot of help in getting started,” said Sokal. “The folks at Curtis Media Group and Time Warner Cable were very supportive.” And with a few introductions from a member of his new congregation, over time Sokal acquired quite a few clients.

By 2010, the lone outpost was flourishing. And by mutual agreement, Mark bought out his partner and established Sokal Media Group, moving the office to Cary, N.C.

Mark knew that the traditional ways of marketing were changing and was one of the first automotive advertising agencies to establish a dedicated digital marketing division within his company, today, branded as Webstreak.

“Auto Dealers are used to dealing with traditional advertising agencies that handle their radio, television, and direct mail. The challenge is that on the digital side, clients usually deal with four to eight different vendors to manage their PPC, Social Media, Website, Mobile, Inventory Marketing, Reputation, and more,” said Sokal. “Sokal Media Group and our digital division, Webstreak is a fully integrated advertising/digital marketing agency that allows dealers to have a holistic approach to their communications.”

Today, Sokal Media Group has grown to serve more than 300 clients. His company now employs more than 100 people in the Carolinas. In addition to their new Raleigh HQ they maintain an office in Charlotte and have field representatives in New York/New Jersey, Colorado and Florida.

The Chris Leith Automotive family of dealerships is one of Sokal’s first clients. “We met Mark way back when he was a one-man band with a pool secretary and a part-time artist in a shared office suite in Raleigh,” said Chris Leith. “He came in with ideas we had never seen before, always fresh and effective. We even harnessed his experience to help train our desk managers and salespeople. All of us at Chris Leith Automotive are proud to have been there from the beginning and congratulate his entire team. We wish them all the best in their new complex.” 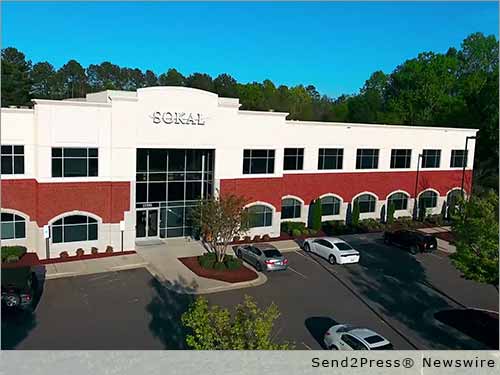 NEWS ARCHIVE NOTE: this archival news content, issued by the news source via Send2Press Newswire, was originally located in the Send2Press® 2004-2015 2.0 news platform and has been permanently converted/moved (and redirected) into our 3.0 platform. Also note the story “reads” counter (bottom of page) does not include any data prior to Oct. 30, 2016. This press release was originally published/issued: Thu, 05 May 2016 12:17:30 +0000

View More Advertising and Marketing News
"Sokal Media Group and our digital division, Webstreak is a fully integrated advertising/digital marketing agency that allows dealers to have a holistic approach to their communications," says CEO Mark Sokal.

LEGAL NOTICE AND TERMS OF USE: The content of the above press release was provided by the “news source” SOKAL or authorized agency, who is solely responsible for its accuracy. Send2Press® is the originating wire service for this story and content is Copr. © SOKAL with newswire version Copr. © 2016 Send2Press (a service of Neotrope). All trademarks acknowledged. Information is believed accurate, as provided by news source or authorized agency, however is not guaranteed, and you assume all risk for use of any information found herein/hereupon.