LOS ANGELES, Calif., Oct. 7, 2015 (SEND2PRESS NEWSWIRE) — The Usual Suspects, a progressive rock band with a bluesy soul, is making an appearance at the Sainte Rock in Hermosa Beach, Calif. on October 25. They will also be promoting their debut CD – “Back to Zero.”

“The first track of our debut CD, ‘Triangle Love,’ was written by our blind keyboard player, Steve Campos. Greg Adams, a founding member of Tower of Power, wrote the horn parts along with two other world-renowned horn players who recorded the horns for this song,” Fred Simon, drummer for the Usual Suspects, says.

The Usual Suspects have a high level of musicianship with strong vocals and harmonies and delivers a wide range of musical styles from soul and progressive rock to funk and rhythm and blues. It’s this eclectic mix that makes them appeal to a wide range of audiences.

The doors for the show at the Saint Rocke open at 6 p.m. and tickets are $12.

The new CD, “Back to Zero,” is available through all major online retailers, including CD Baby (http://www.cdbaby.com/cd/theusualsuspects1), Amazon, etc.

Listen to their music here: https://youtu.be/2K44UsxbhNU.

About the Usual Suspects:
Formed in 2014, The Usual Suspects have been playing in the Orange County and Los Angeles area with some of the biggest names in the industry. They’ve performed with Blood, Sweat and Tears, Badfinger, America, The Winery Dogs and Jefferson Starship, to name a few.

News issued by: The Usual Suspects 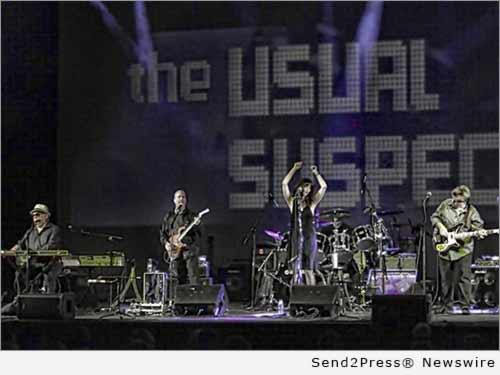 NEWS ARCHIVE NOTE: this archival news content, issued by the news source via Send2Press Newswire, was originally located in the Send2Press® 2004-2015 2.0 news platform and has been permanently converted/moved (and redirected) into our 3.0 platform. Also note the story “reads” counter (bottom of page) does not include any data prior to Oct. 30, 2016. This press release was originally published/issued: Wed, 07 Oct 2015 16:11:42 +0000

More from The Usual Suspects

ABOUT THE NEWS SOURCE:
The Usual Suspects

LEGAL NOTICE AND TERMS OF USE: The content of the above press release was provided by the “news source” The Usual Suspects or authorized agency, who is solely responsible for its accuracy. Send2Press® is the originating wire service for this story and content is Copr. © The Usual Suspects with newswire version Copr. © 2015 Send2Press (a service of Neotrope). All trademarks acknowledged. Information is believed accurate, as provided by news source or authorized agency, however is not guaranteed, and you assume all risk for use of any information found herein/hereupon.