BRADENTON, Fla., Aug. 10, 2017 (SEND2PRESS NEWSWIRE) — An article co-written by Attorney Bernard F. Walsh Esq., and Christina Walsh JD, has been published in the summer edition of The Trial Lawyer. 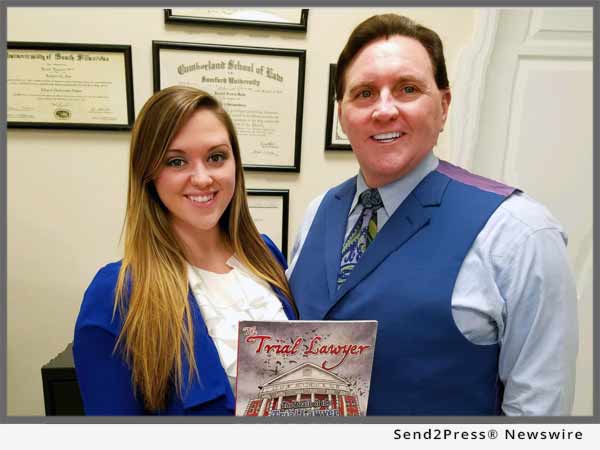 An article co-written by Christina Walsh JD, and Personal Injury Attorney Bernard F. Walsh of the Bradenton, Florida office of Shapiro Goldman Babboni Fernandez & Walsh, has been published in the 2017 Summer Edition of The Trial Lawyer.

Entitled, “Zip-Line & Pre-Injury Releases,” the article brings attention to the troubling rise of serious and fatal accidents arising from zip-lining at private businesses. The article cites a study by the American Journal of Emergency Medicine which examined zip-line accidents nationally from 1997 to 2012.

The study found that over the sixteen year period, nearly 17,000 people were treated for zip-line related injuries, and that the injuries were most common in children and teenagers. The article makes particular note of the apparent spike in the frequency of accidents over the last four years, with nearly ten injuries per day.

The article also points out that while not included in the study, there were more than six deaths from zip-line accidents in 2015 alone, and that the number of both commercial and amateur zip-lines in outdoor educational programs, camps and backyards has increased dramatically as well, to more than 13,000.

In addition to the sheer number of injuries, the study found that many of the injuries sustained from zip-lining were quite serious and included, traumatic head injury, spinal cord injury, broken bones, torn ligaments, ripped muscles, friction burns, lost digits as well as deaths as a result from collisions with other riders, trees and structures or failure of equipment.

Having defined the very real risk and frequency of serious injury and death resulting from zip-line accidents, the article focuses on strategies plaintiff’s attorneys should consider when representing victims of zip-line accidents in personal injury cases, and how to overcome the pre-injury release forms most injured parties would have been made to sign. Additionally, many of the zip-line operators have elected not to carry liability insurance.

As with many dangerous outdoor activities such as tandem skydiving and parasailing, participants are usually required to sign a pre-injury release agreement before participating. Such agreements are designed to release the activity provider from any legal liability should injury occur. However in some cases, these agreements are poorly drafted or other circumstances affect the case that will allow an attorney to win compensation for an injured client.

Co-author of the article injury attorney Bernard F. Walsh offered this comment about the article, “It’s easy to see the appeal zip-lining has, especially for young people. On the surface, zip-lining looks like a fun and exciting outdoor activity that would be a memorable experience.

“However, while collaborating with my daughter to outline the dangers and legal perils of zip-lining, it has become clear that serious injuries from zip-lining are surprisingly common, and that this industry, like so many others has adopted the practice of requiring a pre-injury release which in many cases will make obtaining medical compensation for injuries from equipment failures or a negligent operation much more difficult for a plaintiff’s legal team. Additionally, many of the zip-line operations have elected to carry no liability insurance.”

View More Legal and Law News
"It's easy to see the appeal zip-lining has, especially for young people. On the surface, zip-lining looks like a fun and exciting outdoor activity that would be a memorable experience," said Bernard F. Walsh.