Explains Adam Lowy, Executive Director and Founder of Move For Hunger. "With the support of companies like Victory Packaging, we continue to reduce food waste and fight hunger across North America."

HOUSTON, Texas, Feb. 18, 2016 (SEND2PRESS NEWSWIRE) — Victory Packaging and Move For Hunger are proud to announce their continued partnership in 2016, to help fight hunger and provide much-needed food to local food pantries across the United States. As a proud partner of the national hunger-relief organization for the past four years, Victory Packaging supports Move For Hunger’s efforts to reduce food waste and fight hunger; to date, the non-profit’s network of relocation professionals has collected and delivered more than 6 million pounds of food – providing more than 5 million meals – to food banks and pantries across North America.

“One in six Americans are affected by food insecurity – they do not have reliable access to a sufficient supply of food. It’s a national problem that affects every community,” explains Adam Lowy, Executive Director and Founder of Move For Hunger. “With the support of companies like Victory Packaging, we continue to reduce food waste and fight hunger across North America.”

About Move For Hunger:
Move For Hunger is a 501(c)3 non-profit organization that mobilizes the relocation industry to fight hunger and reduce food waste. Founded in 2009, the hunger-relief organization works with companies across North America to collect unwanted, unopened food from people who are relocating and deliver it to local food banks. To date, their network has delivered nearly 6 million pounds of food to food pantries across North America. For more information or to find out how you can help support Move For Hunger, visit http://www.MoveForHunger.org/. 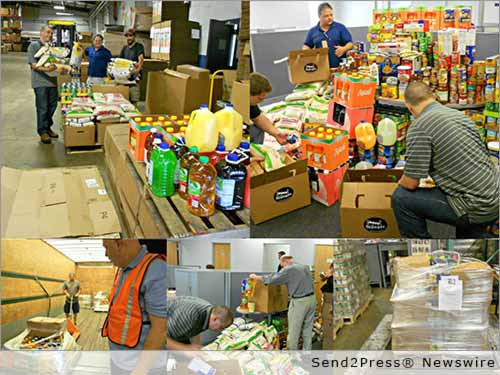 NEWS ARCHIVE NOTE: this archival news content, issued by the news source via Send2Press Newswire, was originally located in the Send2Press® 2004-2015 2.0 news platform and has been permanently converted/moved (and redirected) into our 3.0 platform. Also note the story “reads” counter (bottom of page) does not include any data prior to Oct. 30, 2016. This press release was originally published/issued: Thu, 18 Feb 2016 19:25:59 +0000

View More Food and Beverage News
Explains Adam Lowy, Executive Director and Founder of Move For Hunger. "With the support of companies like Victory Packaging, we continue to reduce food waste and fight hunger across North America."

LEGAL NOTICE AND TERMS OF USE: The content of the above press release was provided by the “news source” Move For Hunger or authorized agency, who is solely responsible for its accuracy. Send2Press® is the originating wire service for this story and content is Copr. © Move For Hunger with newswire version Copr. © 2016 Send2Press (a service of Neotrope). All trademarks acknowledged. Information is believed accurate, as provided by news source or authorized agency, however is not guaranteed, and you assume all risk for use of any information found herein/hereupon.