"As a result of the derailment, Mr. Bignon experienced physical and mental pain and suffering to the extent that he is now completely disabled, unable to work, and unable to enjoy life," said Mr. Samberg. "We are suing to have him justly compensated for his medical expenses, for his lost earnings, and for all that he has been and will long continue to be forced to endure. We are also suing to make sure those responsible are appropriately penalized for their wrongdoing."

NEW YORK CITY, N.Y., Dec. 23, 2013 (SEND2PRESS NEWSWIRE) — What began for Gregory Paul Bignon as a pleasant, carefree Christmas gift-buying excursion on a quiet Sunday morning ended with a train crash and severe injuries that included a broken pelvis, knocked-out teeth, and head, back, and leg trauma, according to Weitz & Luxenberg lawyer Peter Samberg.

This and more resulted when the speeding, Manhattan-bound Metro North Railroad commuter train aboard which Mr. Bignon was traveling jumped the track on a dangerous curve, the same curve where a freight train had derailed only five months earlier.

The Associated Press reported 10 days after the Dec. 1 tragedy that the National Transportation Safety Board determined the diesel-powered train hit the curve at 82 mph. The NTSB said the curve has a speed limit of 30 mph, according to the AP.

The engineer told investigators he applied brakes going into the curve, but the train did not slow down. However, NTSB officials said a mechanical inspection turned up “no anomalies” with the train’s controls, the AP relayed.

Mr. Bignon was violently thrown about inside the coach carrying him as the hurtling, overturned train skidded hundreds of feet amid a storm of metal sparks, dirt, and debris. The Army veteran was among others seriously hurt passengers rushed by ambulance to New York Presbyterian Hospital. Mr. Bignon was subsequently transferred to Helen Hayes Hospital for rehabilitation and extensive, ongoing physical therapy.

Four of his fellow passengers were less fortunate. They perished in the horrific derailment, which occurred 10 miles from New York’s Grand Central Station.

Now, according to his attorney, Peter Samberg of Weitz & Luxenberg, a major national personal-injury and mass-tort law firm, Mr. Bignon has filed a multimillion-dollar lawsuit against the Metro North Railroad along with the Metropolitan Transportation Authority and several government entities sharing blame.

The suit accuses the defendants of negligence and carelessness for allowing the train to reach excessive speeds and failing to ensure the engineer would not fall asleep at the controls. It further alleges the defendants did nothing after the previous derailment to rectify the design of the tracks at that hazardous section.

Moreover, the suit claims the defendants ignored opportunities to install equipment that would have automatically and safely stopped the train in the event the engineer became inattentive. The National Transportation Safety Board announced that such technology – called positive train control – likely would have prevented the derailment had it been in use on the Metro North train, the AP reported.

Screams of terror heard:
The derailment happened at about 7:20 a.m. near the Spuyten Duyvil station in the Bronx. All seven passenger cars and the locomotive came off the tracks. The locomotive was pushing the cars from behind, according to media accounts of the catastrophe.

CNN television reported that screams of terror from the approximately 150 passengers could be heard as the coaches flipped onto their sides. A victim interviewed by CNN told of a hellish shower of gravel that flew up into the faces of passengers after the windows shattered. Adding to the sense of panic and helplessness of the riders, one of the cars came to rest mere feet from plunging into the Harlem River, the network said.

Injuries sustained by Mr. Bignon included agonizing wounds to his face and back, trauma to his head and torso, damage to his nervous system, and post-traumatic stress.

“As a result of the derailment, Mr. Bignon experienced physical and mental pain and suffering to the extent that he is now completely disabled, unable to work, and unable to enjoy life,” said Mr. Samberg. “We are suing to have him justly compensated for his medical expenses, for his lost earnings, and for all that he has been and will long continue to be forced to endure. We are also suing to make sure those responsible are appropriately penalized for their wrongdoing.”

Many failings:
One step the railroad could have taken to prevent the derailment was implementation of an “alerter” system, the New York Times reported in its Dec. 9 editions. Alerter systems detect engineer inactivity, sound an alarm and brake the train if the engineer does not respond, said The Times.

The Metropolitan Transportation Authority told The Times that alerter systems are installed aboard two-thirds of the Metro North fleet, including the one that derailed. However, The Times learned that the alerter was placed in the locomotive at the rear of the train, not in the cab at the front where the engineer was sitting.

Neither was there a conductor present in the cab to serve as a second set of eyes. The Times reported that the MTA in the aftermath of the derailment has ordered conductors be present alongside engineers to verbally confirm the obeying of speed limits at perilous curves (if a train’s cab configuration precludes the conductor from being stationed within the engineer’s hearing, the MTA said the two will communicate by radio, according to The Times).

Another reasonable precaution not taken would have been to mount video cameras inside locomotives and cabs. The Times reported that the presence of cameras discourages engineers from texting or dozing during trips and also permits the monitoring of track conditions ahead. Track condition was another factor contributing to the derailment, Mr. Samberg indicated. “This section of track is known to be dangerous, it has a history,” he said. “In July of this year, five months before this most recent tragedy, a freight train derailed along the same curve and damaged about 1,500 feet of track.”

Meanwhile, the Federal Railroad Administration has ordered MTA to reduce maximum allowable speeds at 26 potential trouble spots on the Metro-North system, The Times revealed. Mr. Samberg said he expects the railroad to claim the reason it did not previously and proactively reduce the speed limits was because it believed such a step would have disrupted commuter travel schedules in and out of New York City, a burden that would have outweighed the benefit.

Said Mr. Samberg, “That line of defense flies in the face of statements made to the New York Times by an MTA spokesman who indicated that new speed limits could be imposed without significantly affecting service.”

Mr. Samberg expressed confidence that Mr. Bignon’s claims will receive a thorough hearing. “This man, who served our country as a member of the armed forces, deserves justice for what happened to him on that train,” he said. “But for the negligence and carelessness of the train’s operators, Gregory would have been able to complete his Christmas shopping as he had planned and would now be able to enjoy a happy holiday with his family and friends. No one on that train deserved what happened to them. It was a terrible wrong we intend to right.”

About Weitz & Luxenberg:
Founded in 1986 by attorneys Perry Weitz and Arthur Luxenberg, Weitz & Luxenberg, P.C., today ranks among the nation’s leading law firms. Weitz & Luxenberg’s numerous litigation areas include: mesothelioma, defective medicine and devices, environmental pollutants, accidents, personal injury, and medical malpractice. Victims of accidents are invited to rely on Weitz & Luxenberg’s more than 25 years of handling such cases – begin by contacting the firm’s Client Relations department at 1-800-476-6070 or at clientrelations@weitzlux.com and ask for a free legal consultation. For more information, visit Weitz & Luxenberg at http://www.weitzlux.com/. 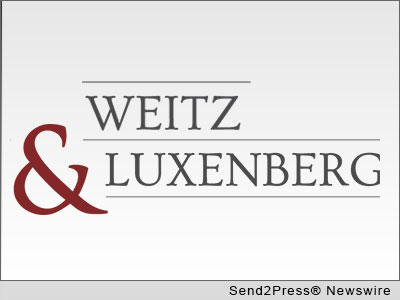 NEWS ARCHIVE NOTE: this archival news content, issued by the news source via Send2Press Newswire, was originally located in the Send2Press® 2004-2015 2.0 news platform and has been permanently converted/moved (and redirected) into our 3.0 platform. Also note the story “reads” counter (bottom of page) does not include any data prior to Oct. 30, 2016. This press release was originally published/issued: Mon, 23 Dec 2013 14:37:59 +0000

View More Legal and Law News
"As a result of the derailment, Mr. Bignon experienced physical and mental pain and suffering to the extent that he is now completely disabled, unable to work, and unable to enjoy life," said Mr. Samberg. "We are suing to have him justly compensated for his medical expenses, for his lost earnings, and for all that he has been and will long continue to be forced to endure. We are also suing to make sure those responsible are appropriately penalized for their wrongdoing."

LEGAL NOTICE AND TERMS OF USE: The content of the above press release was provided by the “news source” Weitz and Luxenberg P.C. or authorized agency, who is solely responsible for its accuracy. Send2Press® is the originating wire service for this story and content is Copr. © Weitz and Luxenberg P.C. with newswire version Copr. © 2013 Send2Press (a service of Neotrope). All trademarks acknowledged. Information is believed accurate, as provided by news source or authorized agency, however is not guaranteed, and you assume all risk for use of any information found herein/hereupon.