"One of the best indicators of how well a hospice organization serves those who need its services remains the death service ratio," says Chris Comeaux, president and chief executive officer of Four Seasons.

A simple, practical measure for monitoring hospice use by patients and families, the Death Service Ratio is an annual record of how many individuals at end of life received hospice care.

Four Seasons serves an average of 1,000 persons daily, providing care to a significant percentage of regional patients at their end of life through its hospice and palliative care programs.

Additionally, family satisfaction with Four Seasons’ quality of care remains in the top 10 percent in the United States. For information on Four Seasons’ services, visit http://www.fourseasonscfl.org/.

“One of the best indicators of how well a hospice organization serves those who need its services remains the death service ratio,” says Chris Comeaux, president and chief executive officer of Four Seasons.

In 2012, of 81,798 deaths statewide, North Carolina estimates indicate 33,060 persons, or 40.42 percent, received hospice care, according to data prepared by the Carolinas Center for Hospice and End of Life Care.

“Providing the best end-of-life care to all those who need it in western North Carolina remains central to the Four Seasons vision and mission” says Comeaux.

Hospice utilization trends continued to show increase across the nation in 2011. North Carolina ranked sixth in the country, and tracked an average hospice utilization rate of 40.6 percent. An estimated 1.65 million people living with a life-limiting illness received care from hospice and palliative care providers in the U.S., compared with 1.58 million in 2010, according to the National Hospice and Palliative Care Organization.

Four Seasons Compassion for Life is a non-profit organization with a dedicated team of health care professionals, social workers, spiritual care professionals and volunteers. Nationally known for its leadership in innovative, quality hospice services, Four Seasons is a Circle of Life award recipient from the American Medical Association.

Learn more about Four Seasons’ values and mission at http://www.fourseasonscfl.org/. 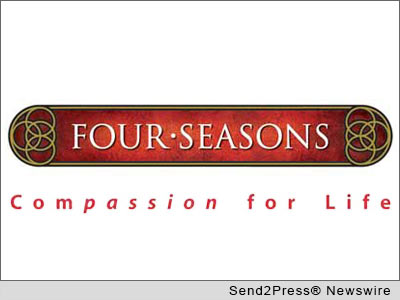 NEWS ARCHIVE NOTE: this archival news content, issued by the news source via Send2Press Newswire, was originally located in the Send2Press® 2004-2015 2.0 news platform and has been permanently converted/moved (and redirected) into our 3.0 platform. Also note the story “reads” counter (bottom of page) does not include any data prior to Oct. 30, 2016. This press release was originally published/issued: Wed, 30 Oct 2013 13:41:49 +0000

View More Awards and Honors News
"One of the best indicators of how well a hospice organization serves those who need its services remains the death service ratio," says Chris Comeaux, president and chief executive officer of Four Seasons.