SACRAMENTO, Calif., May 6, 2020 (SEND2PRESS NEWSWIRE) — The Sacramento SPCA announced today that demand for its COVID-related services is surging in May despite an anticipated decrease based on federal stimulus and unemployment payments to Sacramento area residents. The increase in need comes at a time when the organization is preparing to expand programs, including adoptions, as part of the area’s re-opening plans. 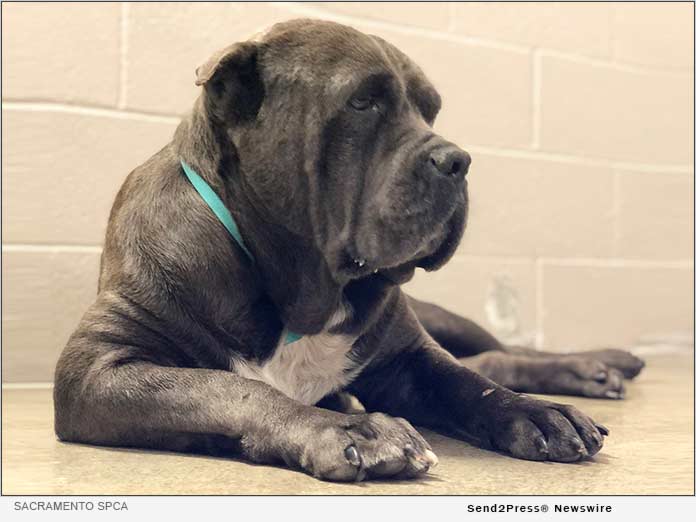 “Instead of seeing a decrease as people’s financial stability was bolstered by the stimulus plans, we are actually seeing a dramatic increase in need for our community’s animals so far this month,” said Sacramento SPCA CEO, Kenn Altine.

“The amount of free pet food being distributed at our twice-weekly drive-through panty is up 50% in the past two weeks, the number of animals we have placed foster homes has increased 84% since the lockdown was put in place, and the number of calls for people who need help with a sick or injured stray has continued to rise,” said Altine.

While the Sacramento SPCA had to adjust their operations due to mandates surrounding COVID-19 in late March, the shelter continues to provide lifesaving care and support to animals at the shelter, hundreds of more animals in foster homes and those still arriving at their doors in crisis.

“As the only shelter in the region offering pet owners a place to take their beloved animals when they have nowhere else to turn; regardless of age, breed, health condition or behavior – closing our doors completely was never a consideration,” said Altine. “From March 20 to April 30, the Sacramento SPCA took in 164 animals in crisis and treated more than 20 animals requiring emergency medical care.”

Animals like Miss Chonk, who arrived to the Sacramento SPCA as a stray with pyometra, a serious and life-threatening infection. She also had a skin and ear infections as well as problems with her eyes. The shelter’s medical team jumped into action to help the sweet girl – she received an emergency spay surgery and medication for her skin, ears and eyes and is now on her way to recovery.

When the shelter in place orders were first issued, the shelter teams worked diligently to find temporary foster homes for as many animals in the shelter as possible so they could focus on the urgent and emergent needs of the community, including animals requiring emergency medical attention.

The shelter reached out to recruit foster families just days before the County order to stay home was issued and in a matter of days, 800 community members volunteered to help. Since March 19, more than 260 animals have been placed in foster homes.

A positive side effect of people being at home is that many of the families fostering animals for the Sacramento SPCA have bonded closely with the animals and expressed interest in adopting. As of May 1, more than 40 animals have been adopted or are in the process of adoption by their foster families.

Because the shelter recognized that many of the people who use their low-cost vaccine clinic had animals at the beginning or half-way through a series of needed shots (canine influenza, distemper, parvo, etc.), they reached out to families and created a way for them to come in for the vital vaccinations while protecting their health and the health of the shelter staff. As a result, more than 500 vaccinations were administered to 376 animals (including booster vaccines for 263 puppies under seven months of age).

In addition to adapting their current programs, the Sacramento SPCA also launched a free pet food pantry to help keep pets and their people stay together and support those who could no longer afford to buy pet food. The twice-weekly drive-through #PAWPantry takes place at the Sacramento SPCA located at 6201 Florin Perkins Road in Sacramento from 11 a.m. to 1 p.m. every Tuesday and Friday. As of May 1, more than 900 families have visited the pantry and received more than 12,000 pounds of free pet food.

“As we watched the flood of layoffs wash over our region, we laid the plans for a drive-through pet food distribution to ensure that no one had to contemplate surrendering a pet because they couldn’t afford or access food,” said Altine. “This resource has been a lifeline for pet owners who weren’t sure how they would buy food for their pets, especially as many are still waiting for income assistance.”

But what started as a temporary relief program for area residents is now likely to become a long-term program at the Sacramento SPCA. “We thought the need would decrease as the stimulus packages came on line,” said Altine, “but the opposite has happened.”

While the Sacramento SPCA has had to restrict the number of people at the shelter, their lifesaving work has continued as an essential community organization. And with Governor Newsom’s four-stage plan for how the state can ease stay at home restrictions in the coming months, the shelter is already planning to expand public access to programs in the coming weeks.

“Expanding access to lifesaving programs while maintaining the health and safety of the community and our staff is our highest priority,” says Altine. “Our teams will be leaning heavily on technology to expand access through appointment-based processes for pet adoption, low-cost vaccinations, animal support and spay and neuter services.”

How Can the Community Help

As the only full-service 100% non-profit animal shelter in the Sacramento region, the Sacramento SPCA relies on donations from individuals, businesses and foundations to support their work. They are local, independent, and do not receive funding from state or local government agencies.

With the Big Day of Giving on May 7, the Sacramento region’s 24-hour giving campaign to support local nonprofits – the Sacramento SPCA is asking for monetary donations to ensure that they can continue to support animals and people whenever and however needed. Learn more: https://www.bigdayofgiving.org/SacSPCA

Donations can be made online or by mail to: Sacramento SPCA, 6201 Florin Perkins Road, Sacramento, CA 95828.

View More NonProfit and Charities News
"As the only shelter in the region offering pet owners a place to take their beloved animals when they have nowhere else to turn; regardless of age, breed, health condition or behavior - closing our doors completely was never a consideration," said d for our community's animals so far this month," said Sacramento SPCA CEO, Kenn Altine.

ABOUT THE NEWS SOURCE:
Sacramento SPCA

LEGAL NOTICE AND TERMS OF USE: The content of the above press release was provided by the “news source” Sacramento SPCA or authorized agency, who is solely responsible for its accuracy. Send2Press® is the originating wire service for this story and content is Copr. © Sacramento SPCA with newswire version Copr. © 2020 Send2Press (a service of Neotrope). All trademarks acknowledged. Information is believed accurate, as provided by news source or authorized agency, however is not guaranteed, and you assume all risk for use of any information found herein/hereupon.