LAS VEGAS, Nev., Oct. 15, 2013 (SEND2PRESS NEWSWIRE) — Ace World Wide Moving & Storage, an agent of one of the nation’s leading movers Atlas Van Lines, is joining The Mob Museum in partnership with Three Square and Downtown 3rd Farmers Market to benefit Move For Hunger, a non-profit that fights hunger across the United States. In coalition with these organizations, Ace World Wide Moving & Storage will be co-sponsoring a local food drive from October 21 to November 10, 2013, at The Mob Museum in Las Vegas.

Throughout the food drive, individuals are encouraged to donate canned meats, canned or powered milk, breads and cereals, personal hygiene products, baby products, and paper and cleaning products. Donations will be accepted onsite at The Mob Museum at 300 E. Stewart Ave. during regular business hours and also onsite at the Downtown 3rd Farmers Market each Friday during the event from 9 a.m. – 3 p.m.

“Ace World Wide Moving & Storage is honored to join other Las Vegas organizations in assisting with Move for Hunger’s nationwide mission to fight hunger,” said Wade Bute, director of operations at Ace World Wide Moving & Storage. “Hosting a food drive event where community involvement is encouraged allows all of us to extend our services and resources to make a difference in others’ lives. We hope our efforts continue to grow with this notable initiative.”

Ace World Wide Moving & Storage is among the more than 500 moving companies that have partnered with Move For Hunger to end hunger. As a member of Move For Hunger, Ace World Wide Moving & Storage generates awareness to nationwide hunger and encourages household move customers to donate unused, non-perishable food items to local food banks upon embarking on a household move.

About Move For Hunger:
Move For Hunger is a non-profit organization that works with relocation companies across North America to pick up unwanted, unopened food from those who are relocating and deliver it to local food banks. To date, Move For Hunger is working with over 500 movers in 46 states and has collected more than 2,100,000 pounds of food. For more information or to find out how you can help support Move For Hunger, visit http://www.MoveForHunger.org/. 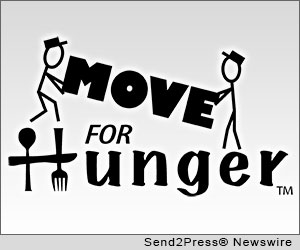 NEWS ARCHIVE NOTE: this archival news content, issued by the news source via Send2Press Newswire, was originally located in the Send2Press® 2004-2015 2.0 news platform and has been permanently converted/moved (and redirected) into our 3.0 platform. Also note the story “reads” counter (bottom of page) does not include any data prior to Oct. 30, 2016. This press release was originally published/issued: Tue, 15 Oct 2013 08:00:21 +0000

LEGAL NOTICE AND TERMS OF USE: The content of the above press release was provided by the “news source” Move For Hunger or authorized agency, who is solely responsible for its accuracy. Send2Press® is the originating wire service for this story and content is Copr. © Move For Hunger with newswire version Copr. © 2013 Send2Press (a service of Neotrope). All trademarks acknowledged. Information is believed accurate, as provided by news source or authorized agency, however is not guaranteed, and you assume all risk for use of any information found herein/hereupon.