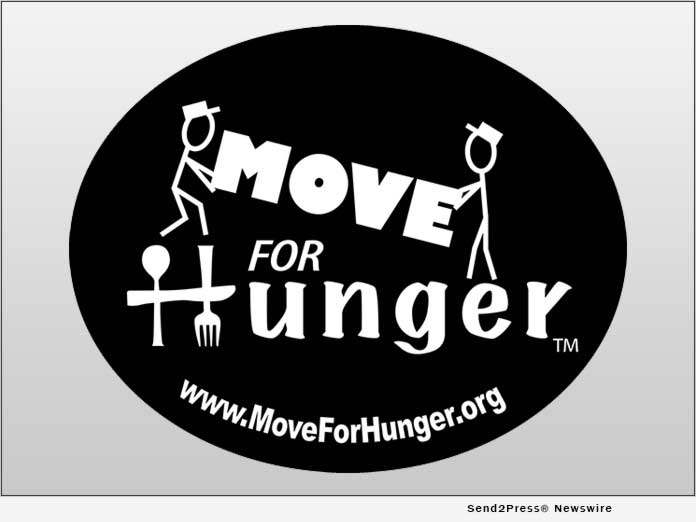 To date, Move For Hunger’s network of relocation professionals and multi-family properties has collected and delivered more than 22 million pounds of food – providing over 18 million meals – to food banks and pantries across the United States and Canada.

During the week of April 5 – 11, the two companies combined to host the Great northAmerican® Food Drive, an initiative that brought together 32 food drives hosted by different northAmerican® Van Line agents spread across 18 different states and Canada. The week-long initiative collected 25,700 pounds of food which is the equivalent of 21,500 meals. The food was distributed to local food banks in various cities.

“northAmerican Van Lines has been an amazing supporter of ours since our early days,” says Adam Lowy, Executive Director and Founder of Move For Hunger. “When they approached us with this idea of holding 30+ food drives simultaneously, we jumped at the opportunity. While we host hundreds of food drives every year, we have never done one on this scale before.”

“Food insecurity has always been a big issue in the United States and Canada, but the pandemic has amplified the need. Food pantries have been hit with unprecedented requests for food from individuals and families directly impacted by COVID-19,” said Kevin Murphy, Vice President and General Manager of northAmerican® Van Lines. “northAmerican and its agent network are committed to supporting the communities we serve in any way possible. We are proud and honored to partner with Move for Hunger, an organization that is truly making a difference in the fight against hunger.”

Food insecurity touches every community in the country. At the start of the pandemic 37 million Americans were going hungry and due to the pandemic that increased to 42 million Americans including 13 million children. Move For Hunger rose to the challenge by transporting 40% more food in 2020 than its previous record-setting year in 2019. Through the support of partners like northAmerican® Van Lines and its parent company SIRVA who is also a partner, Move For Hunger can continue to fight for the families, individuals, and children who are most in need of food assistance.

About Move For Hunger

Move For Hunger (501(c)(3) is a national non-profit organization that has created a sustainable way to reduce food waste and fight hunger. We have mobilized the leaders of moving, relocation, and multi-family industries to provide their customers, clients, and residents with the opportunity to donate their food when they move. Members of Move For Hunger also organize community food drives, participate in awareness campaigns, and create employee engagement programs. For more information, or to find out how you can host your own food drive, visit www.MoveForHunger.org.

North American Van Lines, Inc. (U.S. DOT No. 070851), established in 1933, is a wholly-owned subsidiary of SIRVA Inc., a leader in providing relocation solutions to a well-established and diverse customer base around the world. The moving company, headquartered in Fort Wayne, Indiana, with more than 500 agent locations and partners worldwide, handles corporate, government, military and private relocations, and operates in the U.S., Canada, and over 100 countries. Learn more at www.northamerican.com.

View More Transportation and Relocation News
"northAmerican Van Lines has been an amazing supporter of ours since our early days," says Adam Lowy, Executive Director and Founder of Move For Hunger. "When they approached us with this idea of holding 30+ food drives simultaneously, we jumped at the opportunity."

LEGAL NOTICE AND TERMS OF USE: The content of the above press release was provided by the “news source” Move For Hunger or authorized agency, who is solely responsible for its accuracy. Send2Press® is the originating wire service for this story and content is Copr. © Move For Hunger with newswire version Copr. © 2021 Send2Press (a service of Neotrope). All trademarks acknowledged. Information is believed accurate, as provided by news source or authorized agency, however is not guaranteed, and you assume all risk for use of any information found herein/hereupon.