Tap4Fun, a leading mobile game producer headquartered in Southwest China, has been an innovator in the genre of mobile online strategy games since their first strategy title was released in 2011.

Since then they have added a half-dozen additional strategy games to their collection; but their most recent game is also probably the most exciting.

“Invasion” belongs to the genre of strategic games, however it’s very different from those you have played before; though like other strategy games, you will be asked to establish and develop a base and partner with allies to face off against online opponents.

However, “Invasion” offers a fun and interesting new twist: territorial control, where you will expand your borders and steal territory from opponents while protecting your own homeland from the adversaries that surround you. Beta test players of the game found this to be a meaningfully new game play mechanic that makes the game “feel fresh and different.”

And there’s more! If you’re used to other strategy games, you will be pleasantly surprised because “Invasion” is fully-rendered in 3D and looks amazing; from the realistic depiction of your headquarters in the American Southwest to the interactive battle sequences that take place in the desert. There is a remarkable level of depth and complexity within the game, from the hundreds of upgrades that you can complete in your base to the tech tree which is slowly unlocked as you advance from a small base into a sprawling fortress.

According to Luxi Zhang of Tap4Fun, “If you are fascinated by strategy games, and you are looking for something more visually striking with some fresh gameplay mechanics, look no further: check out ‘Invasion’ on the App Store or Google Play.” 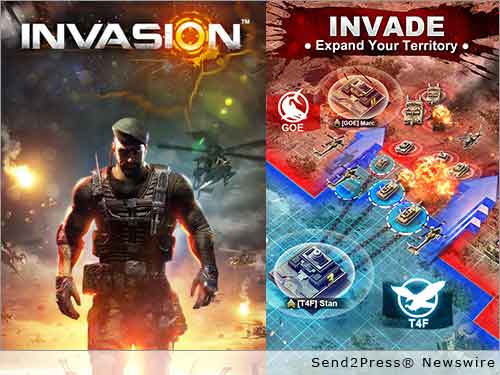 NEWS ARCHIVE NOTE: this archival news content, issued by the news source via Send2Press Newswire, was originally located in the Send2Press® 2004-2015 2.0 news platform and has been permanently converted/moved (and redirected) into our 3.0 platform. Also note the story “reads” counter (bottom of page) does not include any data prior to Oct. 30, 2016. This press release was originally published/issued: Fri, 10 Jul 2015 14:12:54 +0000

ABOUT THE NEWS SOURCE:
Tap4Fun

LEGAL NOTICE AND TERMS OF USE: The content of the above press release was provided by the “news source” Tap4Fun or authorized agency, who is solely responsible for its accuracy. Send2Press® is the originating wire service for this story and content is Copr. © Tap4Fun with newswire version Copr. © 2015 Send2Press (a service of Neotrope). All trademarks acknowledged. Information is believed accurate, as provided by news source or authorized agency, however is not guaranteed, and you assume all risk for use of any information found herein/hereupon.