The patriarch of the Rodgers’ family, Reggie, a 26-year disabled Navy veteran, said, “I have many sweet memories of my family sitting down together eating their banana pudding dessert. This is why I believe it is important to pass the tradition from one generation to another.”

Because of Gin-Gin, the youngest daughter, suggestion to market her father’s recipe of banana pudding sauce that he received from his mother, Polly, the Rodgers family is now sharing their tradition. Their all natural ingredients – low fat, low sodium, and no trans fat – banana pudding sauce is sold in some Kroger stores, commissaries, and farm markets. Sold in 16 and 32 ounce jars to the retail market and the gallon size to food service, another attribute of their banana pudding sauce also includes ease of use.

A banana pudding dessert can be made within minutes. Shake really well before opening, open jar and stir, pour Rodgers’ Banana Pudding Sauce over your wafers, bananas, and spread; now eat and enjoy! 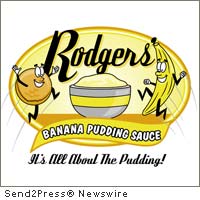 NEWS ARCHIVE NOTE: this archival news content, issued by the news source via Send2Press Newswire, was originally located in the Send2Press® 2004-2015 2.0 news platform and has been permanently converted/moved (and redirected) into our 3.0 platform. Also note the story “reads” counter (bottom of page) does not include any data prior to Oct. 30, 2016. This press release was originally published/issued: Mon, 10 Oct 2011 07:56:22 +0000

LEGAL NOTICE AND TERMS OF USE: The content of the above press release was provided by the “news source” Rodgers Banana Pudding Sauce or authorized agency, who is solely responsible for its accuracy. Send2Press® is the originating wire service for this story and content is Copr. © Rodgers Banana Pudding Sauce with newswire version Copr. © 2011 Send2Press (a service of Neotrope). All trademarks acknowledged. Information is believed accurate, as provided by news source or authorized agency, however is not guaranteed, and you assume all risk for use of any information found herein/hereupon.