According to Triad owner Peter Martin, "'Bush is Bad' was a great show and a big hit with audiences and critics alike. We are very much looking forward to having Josh Rosenblum's new show here at the Triad."

NEW YORK, N.Y., March 9, 2015 (SEND2PRESS NEWSWIRE) — The Triad Theater will present the first New York performances of “Mark Felt, Superstar,” a new musical about Watergate’s infamous Deep Throat, with book, music and lyrics by Joshua Rosenblum. Though his name is little known today, Mark Felt was the retired FBI man who revealed in 2005 that he had been Deep Throat, the secret source for journalists Woodward and Bernstein during the Watergate era.

Deep Throat’s identity was the greatest political mystery of all time and Felt’s story is thrilling, heartbreaking, and funny in equal parts. “Mark Felt, Superstar” is a whimsical and unexpectedly touching musical romp through Watergate and its aftermath from Deep Throat’s unique perspective.

Composer/author Rosenblum is the creator of “Bush is Bad,” the smash hit satirical musical revue that ran for a year and a half at the Triad, and was hailed by Variety as “a sensation.”

According to Triad owner Peter Martin, “‘Bush is Bad’ was a great show and a big hit with audiences and critics alike. We are very much looking forward to having Josh Rosenblum’s new show here at the Triad.”

Neal Mayer (“Les Miserables,” Disney’s “Hunchback of Notre Dame”) takes the title role, leading a multi-talented cast of five, who together will portray twenty-four colorful characters in a fast-moving, illuminating take on the shocking political scandal that riveted America and still reverberates today. The cast also includes Peter Benson (“Drood,” “Promises, Promises”), Will Erat (“Catch Me if You Can,” “Dirty Rotten Scoundrels”), and Michael McCoy (“Phantom of the Opera” “Bush is Bad”). The production is directed by Annette Jolles, with musical direction by Rosenblum.

In addition to “Bush is Bad,” Rosenblum is the composer/lyricist of “Fermat’s Last Tango” (York Theatre Company), “The Haunted Hotel” (Signature Theatre American Musical Voices Project) and “Einstein’s Dreams,” based on the novel by Alan Lightman. Rosenblum has conducted thirteen Broadway shows and is the founding music director of the Pit Stop Players, a critically acclaimed, genre-defying chamber ensemble. More information: http://rosenblummusic.com/. 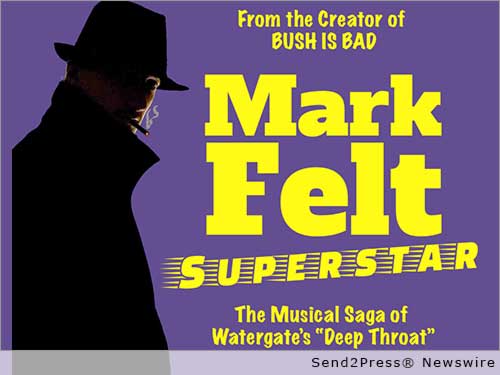 NEWS ARCHIVE NOTE: this archival news content, issued by the news source via Send2Press Newswire, was originally located in the Send2Press® 2004-2015 2.0 news platform and has been permanently converted/moved (and redirected) into our 3.0 platform. Also note the story “reads” counter (bottom of page) does not include any data prior to Oct. 30, 2016. This press release was originally published/issued: Mon, 09 Mar 2015 15:30:57 +0000

View More Entertainment News
According to Triad owner Peter Martin, "'Bush is Bad' was a great show and a big hit with audiences and critics alike. We are very much looking forward to having Josh Rosenblum's new show here at the Triad."

ABOUT THE NEWS SOURCE:
Joshua Rosenblum

LEGAL NOTICE AND TERMS OF USE: The content of the above press release was provided by the “news source” Joshua Rosenblum or authorized agency, who is solely responsible for its accuracy. Send2Press® is the originating wire service for this story and content is Copr. © Joshua Rosenblum with newswire version Copr. © 2015 Send2Press (a service of Neotrope). All trademarks acknowledged. Information is believed accurate, as provided by news source or authorized agency, however is not guaranteed, and you assume all risk for use of any information found herein/hereupon.