NEW YORK, N.Y., Oct. 6, 2011 (SEND2PRESS NEWSWIRE) — If New York City is a state of mind, then Jorge Colombo captures the metropolis’ moods like no other. Published in association with 20×200.com – the place to discover and buy art online – “New York: Finger Paintings” (ISBN: 978-0811879255) by Jorge Colombo features 100 of the artist’s beautiful, full-color illustrations of New York City.

From silhouetted rooftop water towers and the illuminated Chrysler Building at night, to Fifth Avenue in the snow and the ubiquitous hot dog stands, all of the images in the book were finger painted on location on an iPhone, using the Brushes app.

This sophisticated volume, accompanied by Colombo’s recollections and commentaries about each location, was a long time in the making. Among the very first to paint on an iPhone, Colombo had built a successful, decades-long career as artist and illustrator before picking up this new tool. When he did, the resulting works were instantly popular.

First released as limited edition prints on 20×200, his finger paintings were snapped up by art collectors and tastemakers alike. Then, The New Yorker art director Francoise Mouly saw his work and on June 1, 2009, one of the artist’s paintings appeared on the cover of the magazine. Colombo would go on to create numerous fast-selling prints for the art e-commerce site, and more covers and finger paintings for the venerable publication. Finally, in collaboration with 20×200, Colombo’s New York scenes got the fine art book treatment with this new release from Chronicle Books.

Each painting in the book is unmistakably New York: familiar, grand and timeless, yet filtered by modern, cutting-edge technology. Included in the book are essays by New York Times: Abstract City columnist and illustrator Christoph Niemann, as well as Jen Bekman, curator and founder of 20×200. Of the artist’s renderings of her home town, Bekman writes in the book, “Jorge depicts these places with broad strokes and imprecisely shining lights, creating the impression that everything is moving-the traffic and the people, each one of us contributing to the shimmering shuffle of the city’s pulse. This is the feel of the New York I know.”

Immediately recognizable to native New Yorkers, but also perfect for anyone who adores the Big Apple, this is a monograph of an artist and of a city.

You can view a series of Jorge Colombo’s prints at 20×200.com or see how he creates these vibrant images on The New Yorker’s Finger Painting blog. This December, Jorge’s prints will also be on view at Jen Bekman Gallery, 6 Spring Street, New York, NY. Look for more info at jenbekman.com .

About the Author:
Jorge Colombo, a Portuguese-born illustrator, designer and photographer, has lived in the USA for more than 20 years, and he has been depicting American urban landscape ever since. His lushly rendered scenes are currently finger painted from life, on location and using an iPhone, bringing the idea of traditional outdoor easel painting into the 21st century. Regularly released as limited edition prints on 20×200, his images have appeared several times on the cover of The New Yorker. His first cover for The New Yorker, in June 2009, was the first time a smartphone created image made the cover of a magazine. He has been featured in publications such as the New York Times, 7×7, and the Guardian, and shown on Good Morning America, Fox News and all sorts of international outlets.

Christoph Niemann is an illustrator, graphic designer and author of several books, including I LEGO N.Y., who writes and illustrates the New York Times blog Abstract Sunday.

About Chronicle Books:
One of the most admired and respected publishing companies in the United States, Chronicle Books was founded in 1967 and, over the years, has developed a reputation for award winning, innovative books and quality merchandise. The company continues to challenge conventional publishing wisdom, setting trends in both subject matter and format, maintaining a list that includes titles in fine art, cookbooks, children’s books, music and popular culture. To visit Chronicle Books online, go to www.chroniclebooks.com .

About 20×200:
With new limited-edition art prints introduced every week, 20×200 is the place to discover and buy art online. The site was launched in 2007 by gallery owner, curator, writer and entrepreneur Jen Bekman with this simple formula: (limited editions x low prices) + the internet = art for everyone. 20×200 features a curated selection of affordable art online, enabling and encouraging a broader audience to buy art, become collectors and support artists. While the site’s signature art prints are 8x10s sold for $20 in an edition of 200, larger works are available at prices from $50 and $200 to $10,000. Every print is exhibition quality and is accompanied by an artist-signed and numbered certificate of authenticity. 20×200 works directly with more than 200 artists – emerging, established and legendary – giving each the incredible opportunity to share their work with the widest range of potential collectors. New artists and limited editions are announced every week. Newsletter subscribers get first access to the often fast-selling new releases and the curator’s story behind the work and the artist. 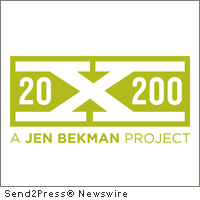 NEWS ARCHIVE NOTE: this archival news content, issued by the news source via Send2Press Newswire, was originally located in the Send2Press® 2004-2015 2.0 news platform and has been permanently converted/moved (and redirected) into our 3.0 platform. Also note the story “reads” counter (bottom of page) does not include any data prior to Oct. 30, 2016. This press release was originally published/issued: Thu, 06 Oct 2011 22:17:52 +0000