"This is the earliest collection of original Walt Disney cartoon drawings not locked away in a museum or the Disney Company archives," says Phil Sears.

LOS ANGELES, Calif., Nov. 3, 2015 (SEND2PRESS NEWSWIRE) — The only known existing scrapbook of original cartoons drawn by Walt Disney will be auctioned at Bonhams in New York City this month, Phil Sears Collectibles LLC announced today. Walt Disney was no more than 17 years old when he drew the 13 cartoon characters in the scrapbook. Two of the characters are rodents, drawn a full 10 years before he created his iconic Mickey Mouse.

The rodents are trench rats; the young Disney drew the cartoons at the close of World War One while serving as a Red Cross ambulance driver. The drawings, dated 1918, include soldiers, the German Kaiser (being kicked off a cliff by an allied soldier), non-war cartoons, and of course the two rodents. The young Disney gave the 11-inch x 14-inch scrapbook to a female friend from Chicago’s McKinley High School. Disney dropped out of high school after only one year, forging his birth date on the Red Cross application to serve in France at the age of only 16.

The Bonhams auction also features the earliest autographed photo of Walt Disney ever offered for public sale. Just 16 or 17 years old in the photo (Walt celebrated his 17th birthday while serving in France), the future entertainment mogul tries to look serious and older than his young age.

Walt Disney collectibles dealer Phil Sears (http://www.philsears.com/) consigned the items to the auction. “This is the earliest collection of original Walt Disney cartoon drawings not locked away in a museum or the Disney Company archives,” says Sears. “In terms of Walt Disney’s life story, these are the ‘cave paintings’ of his creative timeline.” 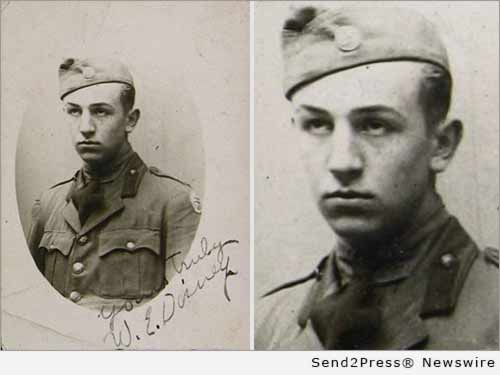 The drawings and signed photograph are two of ten lots of teenage Walt Disney artifacts, all of which are considered to be the earliest of their type ever publicly sold. They go under the gavel November 23, 2015 in New York City as part of the “Bonhams & Turner Classic Movies Presents Treasures from the Dream Factory” auction. The auction lots (including photos, details and bid estimates of Disney lots 138 through 147) are online at http://www.bonhams.com/auctions/22486/lot/138/.

* Image Caption: Rare scrapbook of original cartoon drawings and an early signed photo are among ten lots of teenage Walt Disney artifacts to be auctioned November 23, 2015. 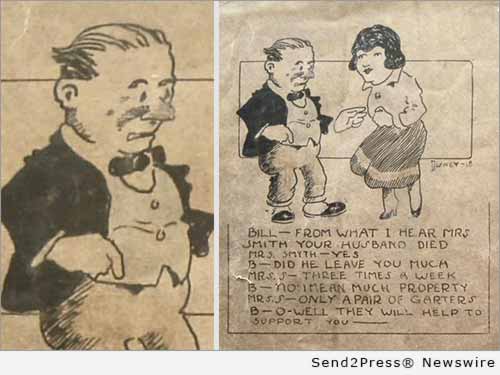 NEWS ARCHIVE NOTE: this archival news content, issued by the news source via Send2Press Newswire, was originally located in the Send2Press® 2004-2015 2.0 news platform and has been permanently converted/moved (and redirected) into our 3.0 platform. Also note the story “reads” counter (bottom of page) does not include any data prior to Oct. 30, 2016. This press release was originally published/issued: Tue, 03 Nov 2015 13:10:28 +0000

View More Auction News
"This is the earliest collection of original Walt Disney cartoon drawings not locked away in a museum or the Disney Company archives," says Phil Sears.

LEGAL NOTICE AND TERMS OF USE: The content of the above press release was provided by the “news source” Phil Sears Collectibles LLC or authorized agency, who is solely responsible for its accuracy. Send2Press® is the originating wire service for this story and content is Copr. © Phil Sears Collectibles LLC with newswire version Copr. © 2015 Send2Press (a service of Neotrope). All trademarks acknowledged. Information is believed accurate, as provided by news source or authorized agency, however is not guaranteed, and you assume all risk for use of any information found herein/hereupon.