SEATTLE, Wash., July 26, 2011 (SEND2PRESS NEWSWIRE) — BetterThanDiamond, Inc. (www.BetterThanDiamond.com), a privately held U.S. corporation, today announced it has filed a patent re-examination request with the U.S. Patent & Trademark Office regarding Charles & Colvard’s (NASDAQ: CTHR) patent for manufacturing “Silicon Carbide Gemstones.” The patent in contention has allowed Charles & Colvard, Ltd. to enjoy a monopoly position and bill itself as the “sole manufacturer” of Silicon Carbide, or Moissanite, gemstones. Moissanite is a lab-grown semi-conductor material with optical properties, such as fire and brilliance, which are superior to gem-quality diamond.

The patent is U.S. 5,723,391 and covers the manufacture of Silicon Carbide, or Moissanite, gemstones. The filing requests the USPTO review and consider the validity of this U.S. patent in light of three “prior art” publications provided to the USPTO by BetterThanDiamond. The three publications span three decades – one each from the 60’s, 70’s and 80’s. Per 35 USC 103, a patent may not be granted when the subject matter as a whole would have been obvious at the time the invention was made in light of prior art. None of the three provided publications, or “prior art,” had been disclosed to the patent examiner or USPTO at the time the current patent was granted.

“The patent system is designed to promote and protect innovation,” said Less P. Wright, President, BetterThanDiamond.com. “This patent however, was thrown out in Korea on the basis of ‘lack of innovation’ – and we couldn’t agree more. Our filing, however, goes beyond opinions regarding innovation or lack thereof, and provides three prior art publications that make obvious to those skilled in the art how to manufacture silicon carbide, or Moissanite, gemstones. We do not believe Charles & Colvard’s patent would have been granted had the USPTO been aware of these previous publications. Thus, we are filing today to allow the USPTO to review the patent’s validity in light of these new disclosures.”

BetterThanDiamond has had several breakthroughs related to the manufacture and improved optical properties of Silicon Carbide or Moissanite, for its “Mira Moissanite” program. However, they have been prevented from combining all of their breakthroughs into a single product offering due to the current patent held by Charles & Colvard. These breakthroughs include patent applications in progress for a new Hearts and Arrows round cut, and the ability to atomically enhance the colorlessness of all Moissanite, including the Moissanite sold by Charles & Colvard. For example – the Mira enhancement process is able to take a typical 1.5ct round from Charles & Colvard, which grades K or “Faint Color” on the diamond color scale, and permanently transform it to H color, or true near colorless. H color grade is a whiter diamond color much more in demand by jewelry consumers than K, or “faint color,” and BetterThanDiamond intends to greatly expand its production of Mira Moissanite once the patent issue is resolved.

The patent re-exam process is expected to take between 3 to 6 months before the USPTO issues a decision.

“We anticipate that our current filing will result in the invalidation of the current patent held by Charles & Colvard. With a successful outcome and our manufacturing no longer restricted, we expect to further surprise jewelry lovers globally with the true beauty of our Mira Moissanite. At that point, we can utilize all of our technology and show Mira’s ‘Beauty Beyond Diamond™’ properties to full effect,” said Mr. Wright.

About BetterThanDiamond:
With its background in solid state chemistry and materials science, BetterThanDiamond.com is focused on the research, development and delivery of the world’s most stunning lab grown gems. A 17 year old private company with customers in over 25 countries, BetterThanDiamond supplies lab grown jewelry products to jewelers and consumers globally. 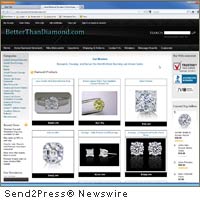 NEWS ARCHIVE NOTE: this archival news content, issued by the news source via Send2Press Newswire, was originally located in the Send2Press® 2004-2015 2.0 news platform and has been permanently converted/moved (and redirected) into our 3.0 platform. Also note the story “reads” counter (bottom of page) does not include any data prior to Oct. 30, 2016. This press release was originally published/issued: Tue, 26 Jul 2011 16:56:01 +0000

ABOUT THE NEWS SOURCE:
BetterThanDiamond, Inc.

LEGAL NOTICE AND TERMS OF USE: The content of the above press release was provided by the “news source” BetterThanDiamond, Inc. or authorized agency, who is solely responsible for its accuracy. Send2Press® is the originating wire service for this story and content is Copr. © BetterThanDiamond, Inc. with newswire version Copr. © 2011 Send2Press (a service of Neotrope). All trademarks acknowledged. Information is believed accurate, as provided by news source or authorized agency, however is not guaranteed, and you assume all risk for use of any information found herein/hereupon.