HOLLYWOOD, Calif., Sept. 2, 2011 (SEND2PRESS NEWSWIRE) — Bands and fans will have an exciting new opportunity for music, merriment and much more as Sheena Metal (http://latalkradio.com/Sheena.php) hosts “Carnyville: An Industry Showcase at The Other Door” every Thursday evening. Located in the NoHo Arts District, the premiere event will take place September 8, 2011.

“Carnyville” will feature live music on the club stage, drink specials at the club’s full bar, plus carny games, circus performers, and food trucks in the parking lot. The Other Door is at 10437 Burbank Blvd. in North Hollywood.

“I’m looking to create a unique party each week with artists and bands of all genres,” states Metal, the event promoter and host on LA Talk Radio. “In addition to having industry audiences at these events, we will also be featuring some surprise celebrity guests,” notes Metal. “Everyone I know in the business is getting an invite to this show,” she adds.

Host of four programs on LA Talk Radio, Metal is also inviting all of her radio listeners. “A total of nearly 175,000 people will receive the e-mail to this night at The Other Door and I expect these shows to fill to capacity. Plus, the artist or band who brings the largest draw of the night will receive a radio interview on LA Talk Radio on my syndicated Music Highway show.”

About Sheena Metal:
Sheena Metal helmed five successful shows in her seven years on KLSX 97.1 FM Talk, then known as “the Howard Stern affiliate station.” She has been written up in the Los Angeles Times Sunday Calendar, LA Weekly, The Daily News, Music Connection and dozens of other periodicals. Metal has appeared as a comedic commentator on “National Inquirer TV,” and was the annual host of the All Access Music Awards. She hosts four shows at LA Talk Radio: the daily afternoon “The Sheena Metal Experience” and three weekly shows, “Haunted Playground,” “Music Highway,” and “Two Chicks Talkin’ Politics” with co-host Susan Olsen (from “The Brady Bunch”). 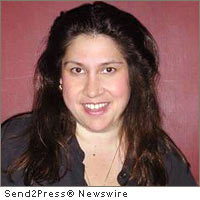 Alternate Headline: Weekly Music Showcase at The Other Door in NoHo hosetd by Sheena Metal

NEWS ARCHIVE NOTE: this archival news content, issued by the news source via Send2Press Newswire, was originally located in the Send2Press® 2004-2015 2.0 news platform and has been permanently converted/moved (and redirected) into our 3.0 platform. Also note the story “reads” counter (bottom of page) does not include any data prior to Oct. 30, 2016. This press release was originally published/issued: Fri, 02 Sep 2011 22:08:18 +0000

ABOUT THE NEWS SOURCE:
Sheena Metal

LEGAL NOTICE AND TERMS OF USE: The content of the above press release was provided by the “news source” Sheena Metal or authorized agency, who is solely responsible for its accuracy. Send2Press® is the originating wire service for this story and content is Copr. © Sheena Metal with newswire version Copr. © 2011 Send2Press (a service of Neotrope). All trademarks acknowledged. Information is believed accurate, as provided by news source or authorized agency, however is not guaranteed, and you assume all risk for use of any information found herein/hereupon.